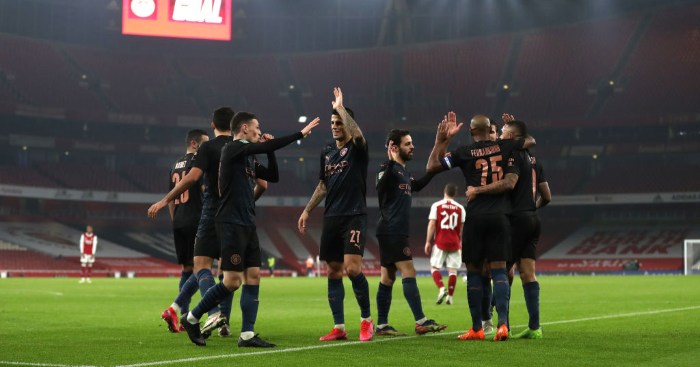 Man City remain on course to win their fourth consecutive Carabao Cup after cruising past Arsenal at the Emirates.

The under-fire Spaniard has not seen his side win a domestic game since November 1 and the Gunners were thrashed 4-1 at the Emirates Stadium with back-up goalkeeper Alex Runarsson enduring a night to forget.

Arteta opted to make eight changes to the team that lost at Everton on Saturday and, while his former boss Pep Guardiola made seven alterations of his own, the difference in the respective squads was clear for all to see.

Gabriel Jesus, Riyad Mahrez, Phil Foden and Aymeric Laporte all capped recalls with the four City goals, while Alexandre Lacazette had briefly equalised completely against the run of play in the first half.

Runarsson should have done better with the opener and was at fault for Mahrez’s strike as he let a free-kick pass straight through his grasp, while the decision to start Gabriel Martinelli – just back from a nine-month lay-off – also backfired as he limped off injured.

Despite all the changes, the visitors looked much stronger on paper and were ahead as Jesus headed home Oleksandr Zinchenko’s near-post cross with a little over two minutes on the clock.

Captain Fernandinho saw a long-range drive deflected behind for a corner soon after as City dominated the opening exchanges.

City continued to press and keep their foot on the gas throughout the first half but it would be Arsenal who equalised out of nowhere.

After an initial ball into the box had been cleared, Martinelli crossed from the byline and Lacazette was on hand to head past Zack Steffen to level for the hosts just after the half hour.

Jesus almost restored the lead but Runarsson, making his first domestic start, made a fine save from the Brazilian.

Martinelli may have only just returned from injury but he was Arsenal’s sharpest player in the opening 45 minutes.

He raced through in an attempt to reach a Joe Willock pass but was beaten to the ball by Steffen and went down seemingly in agony.

The 19-year-old was able to see out the remainder of the half but he looked in discomfort as he hobbled down the tunnel at the interval.

Martinelli emerged for the second half but lasted less than three minutes before going down again, this time limping off to be replaced by Nicolas Pepe.

City would regain the lead 10 minutes into the second half, Runarsson this time taking complete blame for conceding as Mahrez hit a free-kick straight at the Iceland international, only for the ball to escape his grasp and end up in the back of the net.

Foden put City on the cusp on the semi-final, drawing Runarsson off his line and finishing with aplomb – although the England man was lucky that VAR was not in operation as he was offside when the ball was played through.

The tie was finished off as a contest as Laporte celebrated his recall by heading home Foden’s cross from a short corner – a third goal in 18 minutes for Guardiola’s men.

While City continue on their quest to win a fourth consecutive Carabao Cup crown, Arsenal must now prepare for a London derby at home to Chelsea on Boxing Day.

Arteta is in desperate need of a victory against the Blues if he is to begin to turn things around before a favourable trio of fixtures in and around the turn of the year.