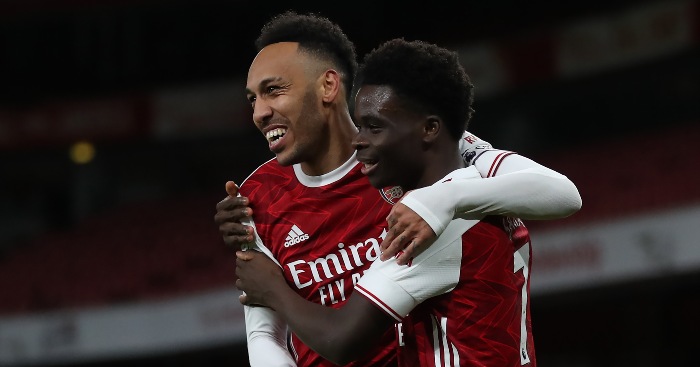 A second half blitz from Arsenal was all too much for Newcastle United to handle as Mikel Arteta’s side move up to tenth.

The Gunners captain struck either side of a Bukayo Saka goal as the hosts recorded a 3-0 victory which sees them move into the top-half of the Premier League table.

Bruce made eight changes from the side beaten by bottom club Sheffield United last week but they were outplayed at the Emirates Stadium, where Mikel Arteta continues to oversee an upturn in form.

Aubameyang was guilty of a huge miss in the early minutes of a first half of few chances – with all the goals coming after the break as Arsenal’s superiority began to shine through.

The hosts had started slowly but the Gabon forward had a chance to open the scoring, instead hitting a post from three yards – a tight angle the only thing working in his defence.

Thomas Partey was back in the side and impressed once more but he fired high and wide as the hosts began to enjoy a period of dominance.

Miguel Almiron flashed a shot just over to show Newcastle could threaten if given a chance, but the opportunities would continue to come the way of the hosts.

Aubameyang came close with a rising shot after being found by Emile Smith Rowe and the Arsenal skipper was not having the best night in front of goal as he sent his next effort bobbling wide.

A slice of luck is what he needed and he almost got just that, seeing a cross deflect off Emil Krafth to send goalkeeper Karl Darlow scrambling to turn the ball behind for a corner which David Luiz then headed wide when completely unmarked.

Alexandre Lacazette had endured a quiet opening 45 minutes but he drew a smart save out of Darlow shortly after the restart with a low drive.

The Newcastle keeper would have no chance moments later as Aubameyang latched onto a long ball from Partey, running in on goal unchallenged before finishing well.

Andy Carroll shot wide as Newcastle looked to strike back from a rare foray forward but instead, Bruce soon saw his side slip further behind.

Arsenal’s two academy stars combined to double their advantage, Smith Rowe darting into the box down the right before squaring for Saka to turn home.

Arsenal scored a third as Aubameyang tucked home his second from a Cedric cross, a VAR check confirming the ball did not go out of play before the Portugal full-back played it into the box.

It was another blow to Bruce and his players as criticism continues to mount on the Magpies boss.

A 1,000-strong supporter group named Toon For Change is now calling for Bruce to be sacked and it remains to be seen if he survives following another deserved defeat.

Arsenal, meanwhile, with the likes of Partey now fit and Aubameyang back among the goals, will continue to look up rather than down.