Home All The News Arsenal 3-0 Wimbledon: Premier League force too strong for Dons 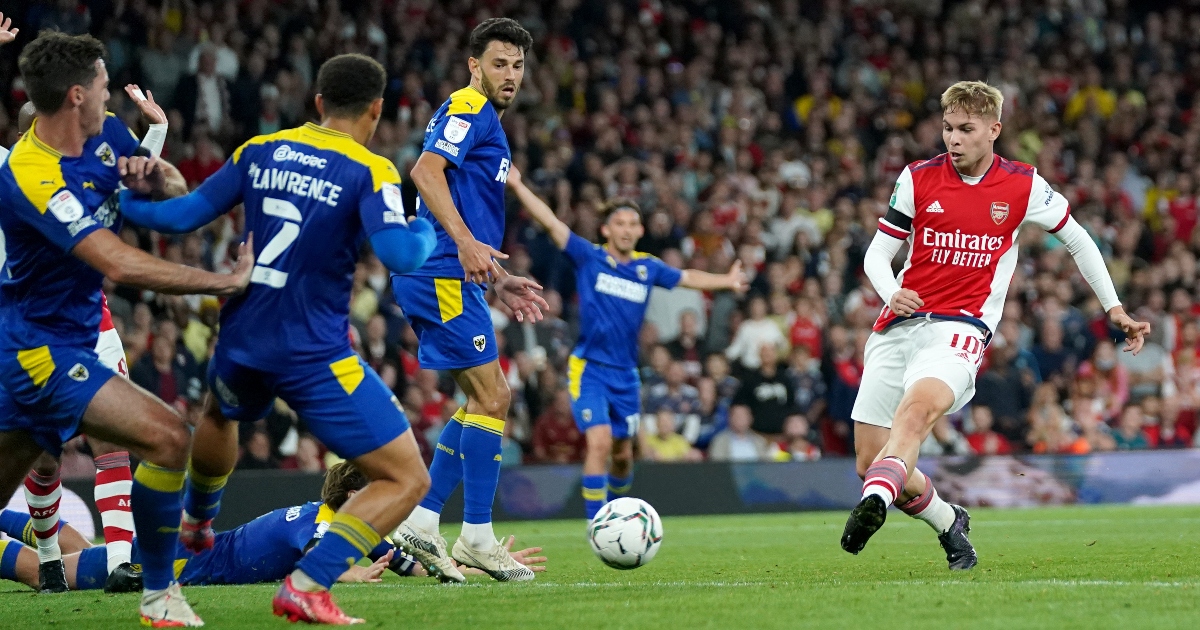 Arsenal have eased into the fourth round of the Carabao Cup after a comfortable victory against League One side AFC Wimbledon.

The Gunners have returned to winning ways of late and Mikel Arteta would have been pleased to see his side add goals to their recently-discovered guile with this 3-0 victory.

It took them until the latter stages to do so, however, with Alexandre Lacazette’s early penalty not built on until the final 13 minutes when substitute Emile Smith Rowe and Eddie Nketiah wrapped up Arsenal’s place in the next round.

This was a chance to give much-needed game time to the likes of Lacazette, Nketiah and Gabriel Martinelli and, in the main, Arteta’s fringe players did well.

Arteta insists Lacazette can play a key role for Arsenal this season despite limited opportunities and his contract expiring next summer.

The Frenchman captained the side and was the man to make the breakthrough in the 11th minute, coolly slotting home from the penalty spot after Martinelli had been felled by Nesta Guinness-Walker.

If those inside the Emirates Stadium expected the floodgates to open at that point they would have been disappointed, Nik Tzanev in the Wimbledon goal going largely untroubled for the remainder of the first-half.

The visitors held their own without truly testing Bernd Leno, back in the Arsenal side having lost the gloves to summer signing Aaron Ramsdale.

The former Wimbledon goalkeeper was not even among the substitutes as Arteta made 10 changes, only Thomas Partey retained from the weekend win at Burnley as he continues to build up fitness ahead of the north London derby.

The Ghana midfielder came close to doubling Arsenal’s lead with a drive from the edge of the box which Tzanev pushed behind on the hour, with Partey making way shortly after.

Nuno Tavares saw a back-post header kept out by Tzanev as the hosts pushed for the goal to kill off the tie but Wimbledon were defending resolutely in numbers – repelling most balls in and around their box.

They could not set up a grandstand finish, however, Arteta throwing on Bukayo Saka for Martinelli with the England man immediately involved in the attack which saw Smith Rowe double the lead.

The result was put beyond doubt just three minutes later, Saka again involved as he worked the ball wide for Cedric Soares to cross and Nketiah to flick in with aplomb.

Ethan Chislett headed wide when he should have done better as the visitors chased a consolation before Saka arrowed a shot inches wide and drew a late save out of Tzanev as Arsenal progressed.