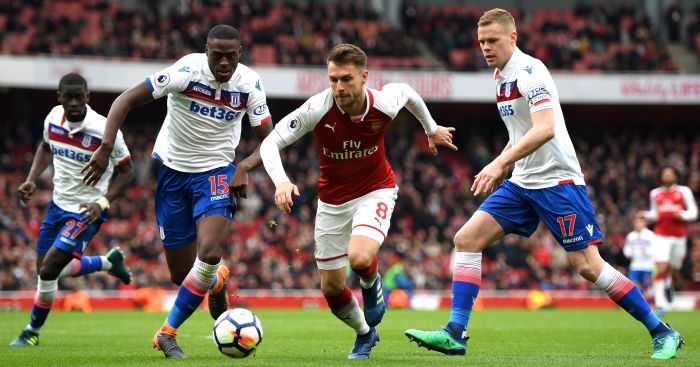 For 70 minutes, Arsenal did their best to produce the complete non-performance. Arsene Wenger was excused his pre-match press media duties and programme notes thanks to a sore throat. Anyone worried that Arsenal’s players might not be behind their manager would have been relieved to see them come out in support of their manager by also failing to show.

The first half was comically poor. Passes of five, ten, 15 and 20 yards in length were misdirected out of play or to the feet of an opponent, each one prompting a groan from the home support slightly more exasperated than the one before. Meanwhile, the empty seats at the Emirates continue to be conspicuous as season ticket holders preferred Easter Sunday slobbing to further punishment at the hands of their beloved.

Mohamed Elneny managed to repeatedly get the ball stuck under his feet. Full-backs pushed forward but then stopped as if short of the belief to surge on. Jack Wilshere and Aaron Ramsey lost the ball through poor first touches. Shkodran Mustafi did that thing where he does the hard things excellently and the easy things badly. Danny Welbeck demonstrated his party trick of making the wrong decision and then acting surprised, as if he isn’t in control of his brain or body. It was as if Wenger’s players were trying to power the stadium on sighs and tuts alone.

The complacency that has engulfed this club, from Stan Kroenke down, is what fuels much of the desire for a new manager. The players take their lead from the coaches who take their lead from the manager who takes his lead from the owner. Performances such as the one in the first half, with urgency and intensity entirely absent, are a symptom of the disease. Wenger’s replacement might improve that lack of intensity. Or give the squad a kick up the arse, if you prefer the colloquial version.

Yet if there is one team who you can rely on to be as incompetent as Arsenal, it is Stoke. Not only has Paul Lambert failed to ignite an improvement in general form, he has made them even less threatening in front of goal. Since his first game in charge, a 2-0 win over Huddersfield, Stoke have scored four goals in eight league games.If that continues, they will be relegated.

If impotency has at least been accompanied by increased defensive solidity, that soon dissipated when Arsenal bothered to put their foot down on the accelerator. Bruno Martins Indi can feel miffed that his slight touch on the ball was not spotted, but from then on Stoke folded like, well, Arsenal often do. The space in the penalty area for the second goal was ludicrous, but not quite as amateur as Badou Ndiaye’s shove on Alexandre Lacazette as he neared the touchline. It was the sort of incident that prompts a squad being called in for an extra day’s training.

If Arsenal’s seven remaining league assignments provide almost nothing of significance or substance, Stoke should be fighting for their lives. And yet, even 32 games into their league season, they resemble a team of component parts. The defensive communication is lacking, while Xherdan Shaqiri deserves sympathy for carrying the team’s attacking responsibility upon his squat shoulders but criticism for repeatedly trying to do everything himself. Of the ten outfielders who started at the Emirates, Joe Allen is only one you would truly trust in the clutch moments.

It was at least fitting that, after the lethargy, Arsenal’s invention came via Mesut Ozil and their goals via Lacazette and Pierre-Emerick Aubameyang. The hope is that those three can represent a new Arsenal, one that can rise out of the ashes of the last miserable 18 months.

For now, they are still fighting to hold back the tide. The supporters are staying away, the squad players are deficient and the Europa League provides the only short at part-redemption. Arsenal, the only club where a 3-0 win provokes the response of ‘yeah, but…’.

Still, it could be worse. Like West Brom and Southampton, Stoke may pay the price for believing that the safe managerial option was the right one. Safe is usually outsmarted by inventive. Three British managers aged between 48 and 56, all of whom eventually failed at their last club: Lambert, Mark Hughes, Alan Pardew. Woe betide the club that believes it can make the manager better. The onus should be on the manager to improve the club. There’s a lesson for Arsenal there too.