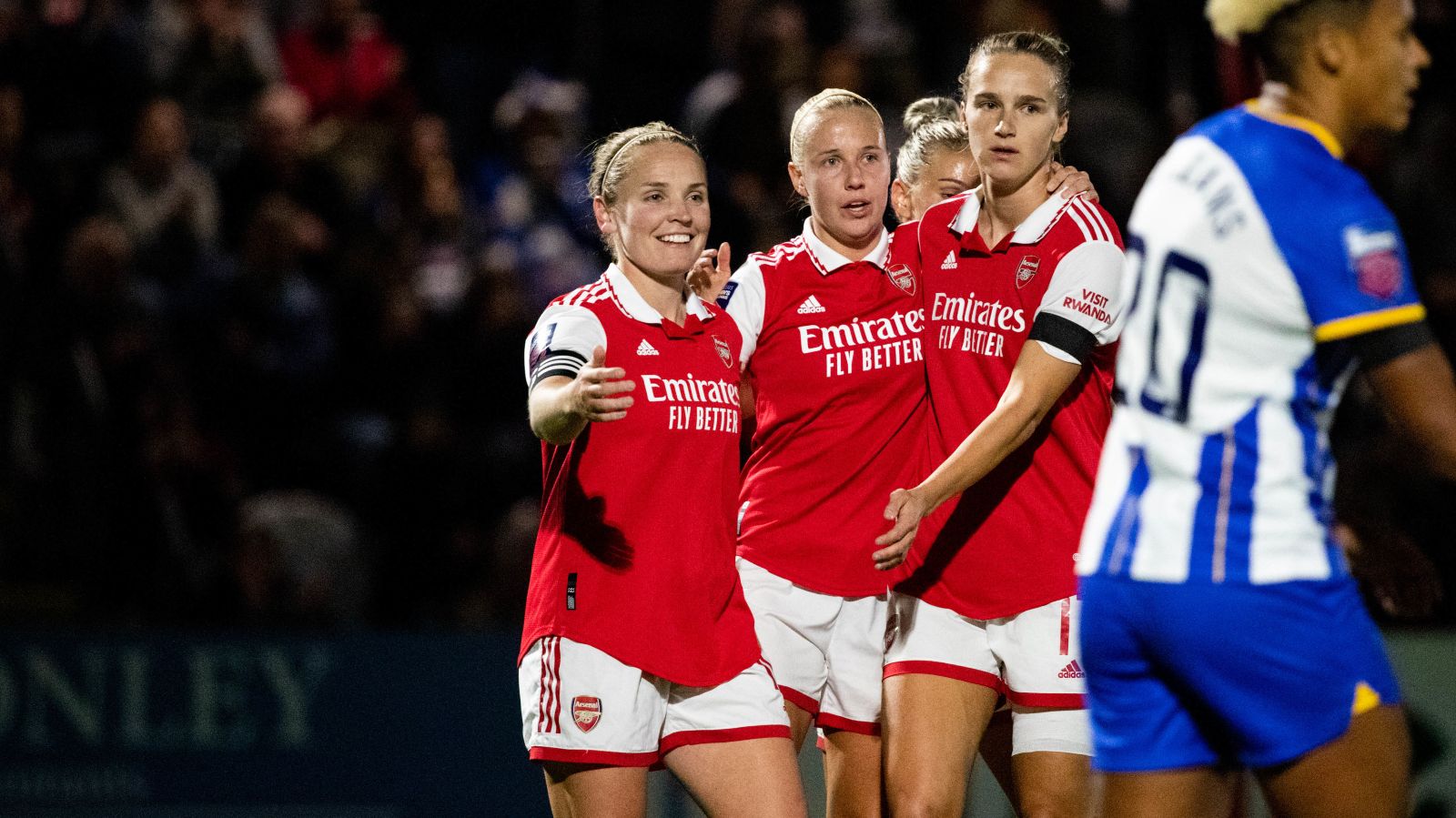 Lionesses star Beth Mead scored a brace as Arsenal breezed past Brighton in the opening game of the 2022/23 Women’s Super League season.

It is now forty-eight days since England’s historic Euro 2022 triumph against Germany at Wembley. The new WSL season opened up at a sold-out Meadow Park after last week’s scheduled round of fixtures was postponed due to the death of the Queen.

Lionesses’ captain Leah Williamson and golden boot winner Mead were back in the spotlight, and back on the winning side, as Arsenal cruised to all three points in what was a dream start.

Brighton were already facing an uphill task to take anything away from Friday night’s fixture following eight defeats in eight matches against the Gunners.

And the visitors’ evening was thrown into disarray when Emma Kullberg was shown a straight red after just seven minutes.

With Stina Blackstenius storming in on Brighton’s goal, Kullberg tripped her Swedish compatriot, and referee Lisa Benn was left with little option other than to dismiss the beleaguered defender.

Jonas Eidevall’s side, who fell just a point short of beating Chelsea to last season’s title, were thrust into complete control and the breakthrough came on 28 minutes when Kim Little struck, moments after Elisabeth Terland spurned a chance to put the Seagulls ahead against the run of play.

Terland was afforded a rare sight of the Arsenal goal, but pulled her effort wide. Ninety seconds later, the home side capitalised as they went ahead themselves.

Caitlin Foord dazzled down the Gunners’ left and her pinpoint pull-back was expertly converted by Scotland international Little.

Arsenal came close to doubling their lead when Blackstenius rattled the crossbar four minutes later, with Megan Walsh then denying Lia Walti following a fine save on the stroke of half-time.

Somehow Hope Powell’s Brighton were only one goal behind at the break.

But five minutes into the second half, Blackstenius put the result beyond doubt when she scored Arsenal’s second.

Mead put the ball on a plate for Blackstenius and the Sweden international lashed her shot into the roof of the net.

Mead was named the player of the tournament at the Euros after scoring six times on England’s run to glory. And she found the back of the net shortly after the hour mark.

Little and Vivianne Miedema were involved in the build-up with Mead coolly slotting home.

With nine minutes remaining, Jordan Nobbs’ shot hit the woodwork, before Mead pounced on a fine save from Walsh to score for a second time in front of 3,238 fans – and fire an early title warning to rivals’ Chelsea who travel to Liverpool on Sunday.