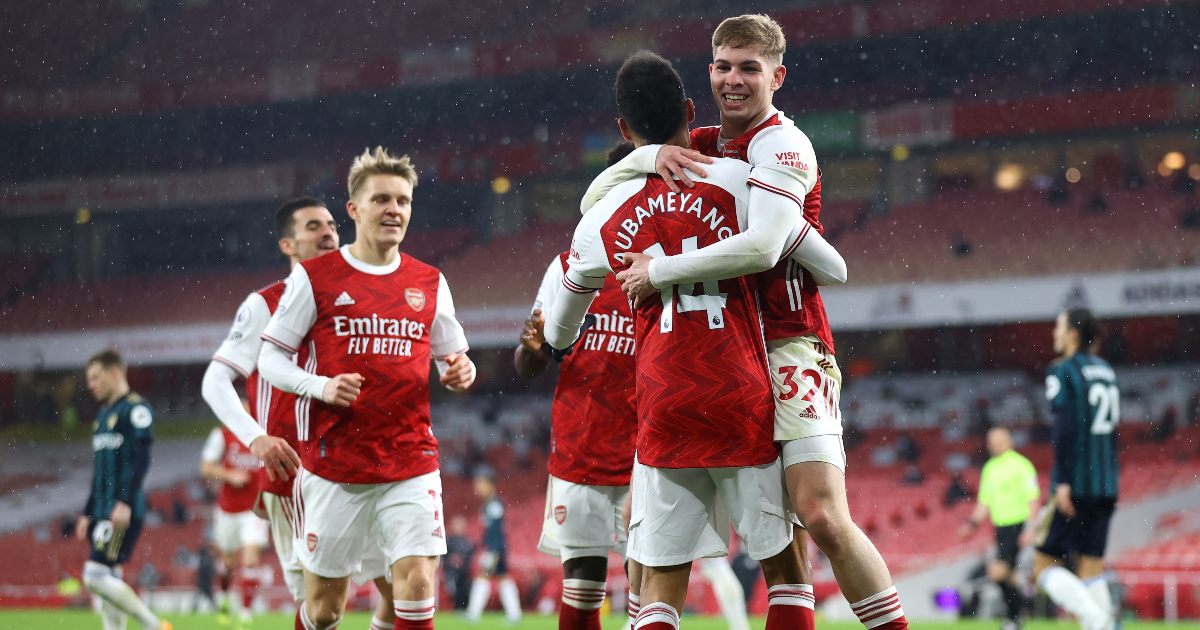 Pierre-Emerick Aubameyang scored a hat-trick for Arsenal to help them to a convincing victory over Marcelo Bielsa’s Leeds United.

The Gunners captain had not started in five games after leaving the club’s coronavirus-secure bubble to tend to his ill mother.

But he marked his comeback in fine fashion as a spirited Leeds were beaten 4-2 at the Emirates Stadium, having started the afternoon above their hosts in the table.

Operating as the main striker, Aubameyang opened the scoring with a low finish before doubling the lead with a penalty and completing his hat-trick with an early second-half header.

Hector Bellerin’s first goal in over a year had Arsenal three goals to the good at the end of a first half they had dominated, only for Leeds to rally with goals from Pascal Struijk and Helder Costa to make it an uncomfortable end to the game for the hosts.

Mikel Arteta handed a full debut to Martin Odegaard, deploying a lively trio behind Aubameyang – with Bukayo Saka and Emile Smith Rowe on the flanks proving a constant threat to the Leeds backline.

Leeds had the first true sight of goal as Jack Harrison crossed for Patrick Bamford, whose header was held by Bernd Leno.

It appeared to be an early warning sign for the Arsenal but instead Arteta’s men responded well.

Aubameyang would break the deadlock with 13 minutes on the clock, cutting into the box from the left, skipping inside of Luke Ayling and shooting low past Ilan Meslier – who will have been disappointed to only get a hand to the effort.

He came close to his second soon after, the recalled David Luiz bursting forward and crossing for his captain, whose strike was bravely blocked by Ayling.

Arsenal were then awarded a penalty by Stuart Atwell as Saka burst into the box and went down under pressure from Liam Cooper – but the referee changed his original decision after watching the replay on the VAR pitchside monitor.

Just moments later and Saka was awarded a penalty as the England international closed down Meslier, with the Leeds goalkeeper losing possession and clipping the winger.

There was no VAR involvement this time and Aubameyang tucked away his second of the afternoon from the spot.

Saka was involved in Arsenal’s third, dancing across the edge of the Leeds box before the ball was worked to the far post, where Dani Ceballos would eventually play in Bellerin with a fine pass and the full-back squeezed a shot through Meslier.

Leeds made two changes at the break as Tyler Roberts and Costa came on – but they were soon even further adrift as Aubameyang completed his hat-trick by heading home a smart Emile Smith Rowe cross.

The visitors did not let their heads drop and were soon getting among the goals themselves as Struijk’s bullet header – his first goal for the club – pulled one back before a cool Costa finish moved them just two behind.

Arsenal remain the only club to let at 4-0 lead slip in a Premier League game and a 4-4 draw at Newcastle 10 years ago this month would have been in the minds of the fans watching from home.

Saka hit a post only to be flagged offside and Cedric Soares saw a long-range effort pushed away as Arsenal sought to kill off any prolonged hopes of a Leeds comeback.

Leeds would enjoy plenty of the ball in the closing stages but could not get any closer to a shock fightback as Arsenal returned to winning ways and back into the top-half of the table.