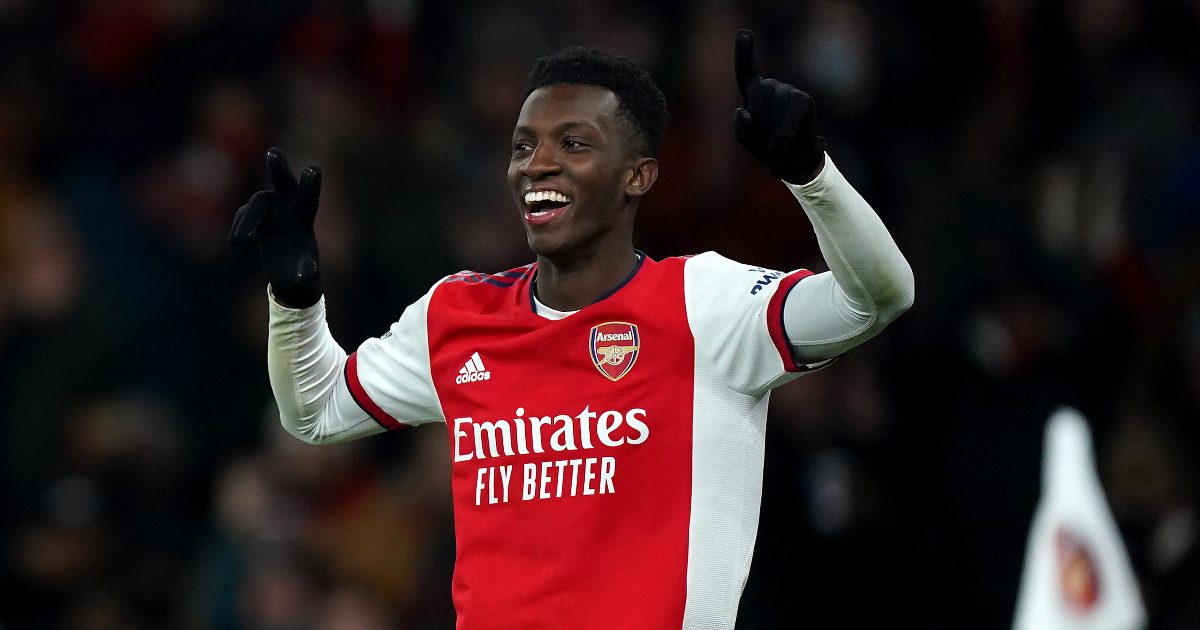 Eddie Nketiah’s hat-trick helped Arsenal ease past League One side Sunderland to book their place in the semi-finals of the Carabao Cup.

The academy product is out of contract this summer and he has reportedly turned down a new deal. But he shone against Sunderland, as 18-year-old Charlie Patino scored on his debut.

Nketiah and Nicolas Pepe put Arsenal in control early on but Nathan Broadhead made it 2-1 before the break.

Any threat of a shock was extinguished within 13 minutes of the second half as Nketiah provided two smart finishes and Patino came off the bench to add the gloss with a late fifth.

Mikel Arteta’s side sit fourth in the Premier League and showed nine changes from Saturday’s win at Leeds as only Ben White and Martin Odegaard kept their places.

Sunderland wanted a early penalty as Ross Stewart went down in the box under close attention from Mohamed Elneny – but there appeared to be no contact and the claims were waved away.

A stroke of luck almost put the hosts ahead as a Nuno Tavares cross was turned against his own crossbar by Eddie Embleton with Arsenal starting to knock at the door.

The deadlock would be broken soon after, Rob Holding’s header well-saved by Lee Burge, only for Nketiah to knee home the rebound from close range.

Pepe, the club-record signing given a rare start by Arteta, doubled the lead as he exchanged passes with Cedric Soares before seeing his strike deflected past the helpless Burge.

But if Arsenal thought they were coasting into the semi-finals, they were wrong.

Sunderland would hit them on the break, Broadhead coolly finishing a quick-fire counter from the visitors to half the arrears.

Bernd Leno was then forced into a low save to keep Arsenal ahead as the Sky Bet League One side ended the half on top – although they did lose Broadhead to injury before the interval.

Sunderland boss Lee Johnson had joked about wanting to face Arsenal in the quarter-final after seeing off QPR in the previous round – saying facing the Gunners or their north London rivals Tottenham would let them face “the really big guns” in a two-legged semi-final.

He dismissed the comment as “dad banter” on the eve of the tie but Arsenal showed – in the minutes following half-time – that even their much-changed side were more than enough to see off Johnson’s spirited visitors.

Two flicked finishes from Nketiah would settle the contest, the first from a Tavares cross and the second after some superb work from Pepe – who impressed on his return.

Embleton had hit the post in between but Sunderland were out of the tie as their vociferous following sang throughout.

Arteta was able to hand a first-team debut to highly-rated midfielder Patino for the final 10 minutes, the England Under-19 international replacing fellow academy graduate Emile Smith Rowe and sliding in to convert another Pepe assist to put the cherry on top of the cake for Arsenal.