Aaron Ramsey has "certainly got the appetite" to play for Man Utd, says his former Wales manager. 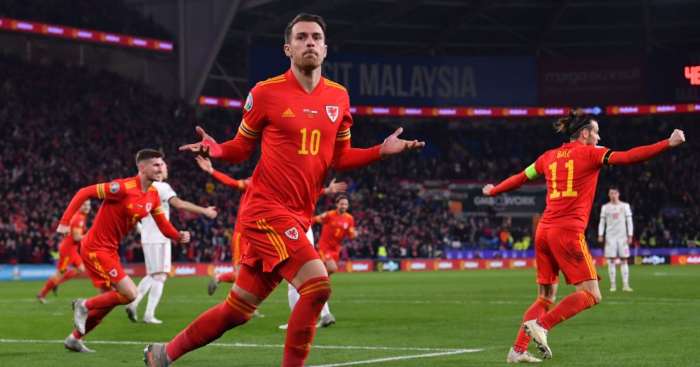 Juventus midfielder Aaron Ramsey has “certainly got the appetite” to play for Man Utd, according his former Wales boss Chris Coleman.

The Welshman left Arsenal to join Juventus on a free transfer last summer after his contract was allowed to run down at the Emirates Stadium.

Ramsey has struggled to make his mark in Serie A, with just four goals and an assist in 24 appearances in all competitions since moving to Turin.

The latest rumours in today’s newspapers claim that Ramsey could be used in a swap deal as Juventus look to bring Paul Pogba to Italy from Man Utd.

“I’ve been fortunate to see the best of Aaron, he’s at his best when he’s under a bit of pressure, when he’s playing under the best teams in the big games,” Coleman told beIN Sports.

“I understand why he went to Juventus, obviously a great club, they’ve got a great chance of winning the league. But he wants to be in the starting XI, that’s where he needs to be, and in my opinion he’s good enough to be there, I don’t know why he’s not in the starting XI.

“I was glad when I heard he’d gone to Juventus. He’d been at Arsenal a long, long time, probably didn’t achieve what he wanted to achieve, or Arsenal haven’t achieved in the last 10 years what they used to.

“And to play abroad, the pull of that, the challenge of playing abroad for a massive club like Juventus who, season in, season out, are challenging for the league or a cup competition, they were in the Champions League final a year or two ago.

“So, obviously, he’s gone there for a good reason, but he’s too good to be sitting on the bench, in my opinion.”

On rumours he could leave Juventus and reports linking Ramsey with Man Utd, Coleman added: “My advice to him is, obviously I don’t know what’s going on at Juventus, if he’s got a chance at Juventus and Sarri likes him but he just may be out of form, maybe it’s taken him a while to get used to a different culture because it’s not easy.

“It’s not walk in the park when you go from one country to the next, different type of football, different asks, different challenge. It may take him a season to settle in there.

“But if it’s not going to happen for him, he’s definitely the type of player that could handle playing for Manchester United.

“Because when you play for Manchester United the jersey is much heavier than when you’re playing for another club in the same league, a smaller club with all due respect, and the weight of the jersey is not the same.

“When you’re playing for a big club you’ve got to be able to handle that week in, week out. And he’s certainly got the appetite for that.”