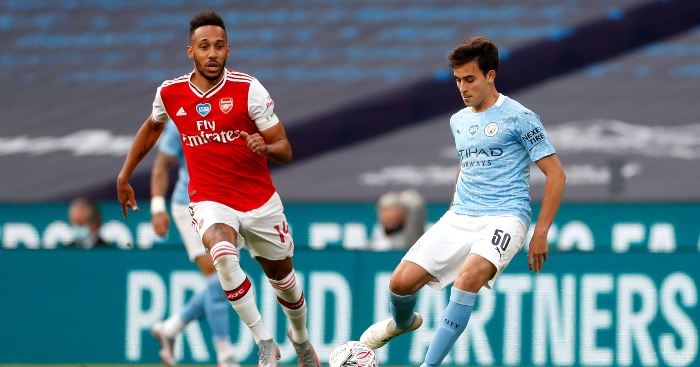 Garcia looks set to leave the Etihad after rejecting the offer of a new deal.

Barcelona are the frontrunners to sign him, but they could face competition from the Premier League.

According to Spanish outlet Mundo Deportivo, Arsenal will attempt to sign the centre back ahead of Barca.

The Gunners want to use manager Mikel Arteta’s pre-existing relationship with Garcia as a major reason to move.

He is known to be a big admirer of his compatriot. The 20-year-old looks set to become a future star after coming through the ranks at Barca’s famed La Masia academy.

Guardiola initially wanted Garcia to remain at the club, but he is now expecting the player to leave. When asked about the situation recently, Guardiola said: “We will see what happens at the end of the transfer window. I don’t think he will sign a new contract.

“I am pretty sure he is going to leave at the end of the season and now, in this transfer window, it will depend on the [other] clubs.”

Arsenal and Barca are joined by French giants Paris Saint-Germain in the hunt for Garcia.

It’s thought that Mauricio Pochettino sees Garcia as a priority target in defence, meaning they could offer him a contract in the coming months.

Whoever manages to sign the defender will be completing a shrewd piece of business. He is a talented individual with bags of potential, who has trained with some of the best coaches in the world.

So far in his career, Garcia has made 31 appearances in all competitions for City. That includes three Premier League and three Champions League matches this term.