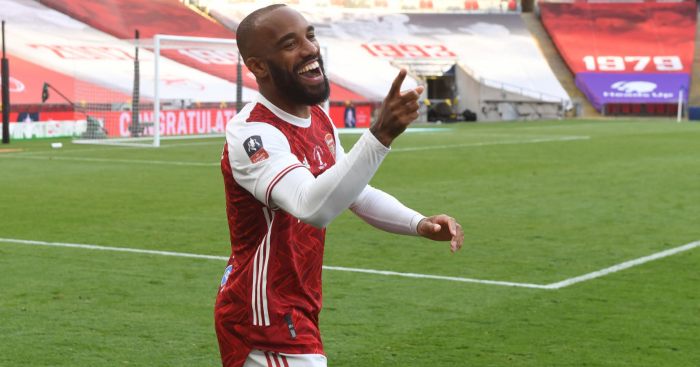 Arsenal could use Alexandre Lacazette as part of a swap deal to land Juventus winger Douglas Costa, according to reports.

Lacazette‘s future at the Emirates Stadium has come into question recently. With Arsenal preparing a big new contract for Pierre-Emerick Aubameyang, they may not be able to guarantee regular first team football to the Frenchman.

And, with young strikers Gabriel Martinelli and Eddie Nketiah also showing promise this season, reports have suggested the Gunners could cash in on Lacazette.

Arsenal are looking for £30m for the former Lyon striker. Given that he only has two years left on his contract, this may be their best time to sell.

And doing so could allow them to win the race for a Manchester United target. According to The Athletic, Arsenal are open to allowing Lacazette to leave via a swap deal.

That has sparked the interest of Juventus, who have shown an interest in the 29-year-old in the past.

The report claims that Juventus could send either Costa or Cristian Romero to the Emirates Stadium in return for Lacazette.

Brazilian winger Costa appears to have no future in Turin, having fallen down the pecking order. Recently, Manchester United outlined him as an alternative to Jadon Sancho – but several unnamed Premier League rivals were also said to be interested.

Indeed, it has now emerged that Arsenal may be able to beat them to Costa by sending Lacazette in return. Or even if they choose against Costa, they could end up with Romero to strengthen their backline.

Defence is one of Arsenal’s main concerns for the current transfer window. Romero could be an option to solve their issues. He has impressed on loan at Genoa this season.

Previous reports had suggested that the main suitor for Lacazette was Atletico Madrid. There was even talk of a potential swap deal with them.

However, there is interest in Lacazette from Italy as well. Inter Milan have been mentioned as a possible destination in the past.

Last month, reports suggested that Lacazette was tempted by the chance to play for Juventus. The move to Serie A would give him a fresh challenge and allow him to play in the Champions League.

The Turin giants were said to have already opened talks with him over a potential move. And the France international was receptive to the opportunity, which could now become more concrete.