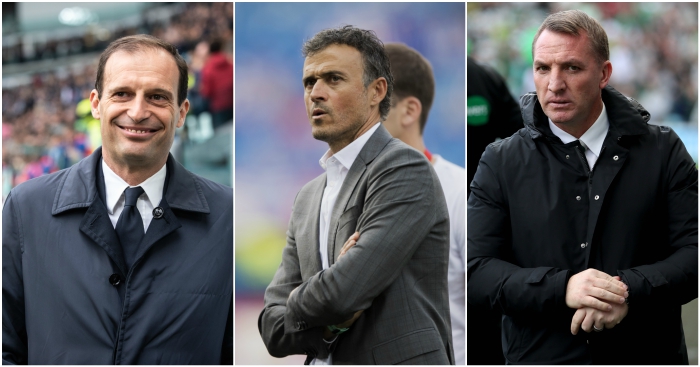 The news of Arsene Wenger’s impending departure from Arsenal is only 48 hours old, but already there are plenty of rumours circulation about his potential replacement at the club, and on what Wenger might do next. Here’s your latest round-up…

– We’ll start with the Daily Mail, who say that Wenger knew four weeks ago that he would be leaving Arsenal at the end of the season. It had become apparent that Arsenal were planning for life without him, and thus Wenger made the painful decision to jump.

– The Times believe that Luis Enrique’s chances of being appointed at the Emirates have improved with the news that Chelsea aren’t particularly interested in him.

– German newspaper Bild – information passed on by The Sun – reckon that Nice manager Lucien Favre is in the frame for the Arsenal gig. That would be a slightly weird call given that Favre is a) 60 years old, and b) hasn’t managed an elite club.

– The Sun also mention that Max Allegri is also under consideration.

– The Daily Mirror reckon that Paris Saint-Germain will attempt to make Wenger their new club president, thus being responsible for the club’s transfer dealings and general PR. Cushy number?

– Hoffenheim boss Julian Nagelsmann is one name reportedly in the frame, but he batted away questions on Saturday about the position:

“I don’t think there is any truth in it. These are just rumours. I focus on myself and my team the focus is on nothing else.

“I’m not annoyed by the discussion. I focus on myself and my team.”

– The Sunday Mirror reckon that Allegri, Leonardo Jardim and Brendan Rodgers are all likely to be interviewed by Arsenal in their hunt for a new manager. This is already looking like a very long shortlist.

– The Sun report that Wenger took a £11m pay-off to stand down one year before the end of his contract. Which is bloody wonderful work.

– The Sun also say that Wenger will open talks with Monaco about a position within their structure, as well as PSG.