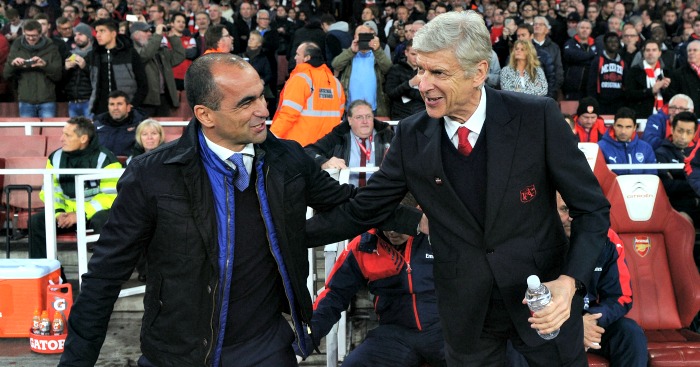 In the blue corner, the challenger. The challenger to the title of the most frustrating club in the land. The side that boasts more young, exciting talent than most sides in Europe, yet are level on points with Bournemouth. The team who could beat Barcelona at the Nou Camp one week in a statement victory and lose to Mansfield Town at Goodison Park the next with barely a whimper.

In the red corner, the champion. The champion of glorious failure. The champion of disappointing fans. The champion of excelling when the pressure is off and hopes have already been crushed. The club who were in three competitions a month ago, subsequently retreated feebly from each, then produced something approaching their best football in their next game. No pressure, no problem.

At Goodison Park on Saturday lunchtime, English football witnessed a microcosm of the problems facing the two clubs involved. A week after reaching the FA Cup semi-final, Everton were thoroughly outclassed as they slipped to a third defeat in their last four Premier League games. They have now conceded the most goals of any side at home in the league, and only two clubs have procured fewer points in front of their home fans.

It was no surprise that Arsenal dominated their hosts. On this day a month ago they were two points behind Premier League leaders Leicester, faced Championship side Hull City in the FA Cup fifth round, and were talking up their chances of shocking Barcelona in the Champions League. They have won just two games in nine since February 19: a 4-0 victory over Hull, and the 2-0 win over Everton. After five defeats had ended their hopes in two competitions and left their Premier League prospects in significant doubt, Arsenal turned up. No pressure, no problem. Eight ingredients for the perfect season had passed; this was the ninth.

The Gunners were excellent in an error-strewn game on Saturday. Danny Welbeck continued to expose the folly of Olivier Giroud and Theo Walcott acting as leading strikers for a supposedly elite European club. Alexis Sanchez enjoyed his best performance since returning from injury in January. Alex Iwobi was excellent on his Premier League debut. Everton created little at one end, and struggled to cope with the effervescent one-touch football at the other. But this was all so familiar.

“The Premier League is more open than people think,” said manager Arsene Wenger after the 3-1 defeat to Barcelona on Wednesday. Even after victory on Merseyside, Arsenal sit eight points behind Leicester, and three behind second-placed Tottenham. Both have a superior goal difference, as do fourth-placed Manchester City. Leicester and Spurs have lost as many league games combined this season as Arsenal have overall (seven). The former have won six of their last eight games; the latter have emerged victorious in seven of their last nine in the league. Arsenal have won three of their last ten. For both of the top two to drop points is unlikely. For the Gunners to simultaneously capitalise with their own run of form is unfathomable.

Optimism should not be ridiculed, but that post-Barcelona claim had all the hallmarks of a Wenger promise. The Frenchman discussed how his side could “make the impossible possible” by overturning a two-goal deficit to advance past the European champions before the game. They failed. After bemoaning that winning the FA Cup is “never enough” for some demanding fans, the boss led his side to a deserved defeat to Watford the following day. They failed. Having taken the pressure off themselves by obliterating their title hopes, Arsenal were much improved. They did not fail on Saturday, but only because they could not. The league is pretty much lost.

“It’s the modern times that there’s almost a need to have an opinion and criticise the losing team,” Martinez said of the backlash Wenger had received before Saturday’s game. “What he has achieved at Arsenal is a model that many, many football people have been inspired by,” the Spaniard added. It’s a model that Martinez has followed too closely. As the Wenger motto goes: One hand giveth, the other taketh away. While the Frenchman has taken two decades to truly master the art, Martinez has perfected it in under three years.

If any club and any manager is able to compete with Arsenal and Wenger in terms of huge promise followed by intense disappointment, it is Everton and Martinez. One week ago, the club secured a place at Wembley in the FA Cup semi-final. Three weeks ago, Iranian businessman Farhad Moshiri was announced as a stakeholder, and with it came the promise of vast investment. It is an investment which Martinez continues to prove he is not worthy of overseeing.

Martinez has failed to achieve with the talent his current squad boasts; how can Everton possibly trust him with directing such a critical stage in the club’s development? Romelu Lukaku did not score on Saturday for the first time in four games, but the Belgian has scored 18 league goals already. Jamie Vardy and Harry Kane (both 19) are the only players to outscore him, and they play for the top two sides in the division. Behind Lukaku are Sergio Aguero (15) and Riyad Mahrez (14), who play for the fourth-placed side and the league leaders. Even with Lukaku’s goals, Everton are 12th.

“My philosophy and my way of working is not to keep clean sheets, my philosophy is to win games,” said Martinez in January. The reality is that neither are common at Everton. Such willful naivety about the defensive side of the game is hurting the Toffees. They have outscored all but three sides, but have conceded more than all but six. They have lost eight games at home. They have already conceded more goals this season than in every campaign from 2011 to 2014.

There is a sense that the FA Cup is not just make or break for Everton’s season, but for Martinez’s spell as manager. The Toffees face either West Ham or Manchester United in the semi-final, and will take on either Watford or Crystal Palace if they progress to the final. It is a competition which each side will rightfully view as eminently winnable. But would even that be enough for Martinez to remain? Is continual failure in the league despite boasting such a talented squad really offset by delivering a trophy? It is no coincidence that the Spaniard’s last managerial spell at Wigan ended in the glorious failure of FA Cup victory coupled with Premier League relegation.

Typical. Typical of Everton to follow up quality with inferiority. Typical of Arsenal to follow up mediocrity with brilliance. The two clubs are kindred spirits in glorious failure and failed glory.