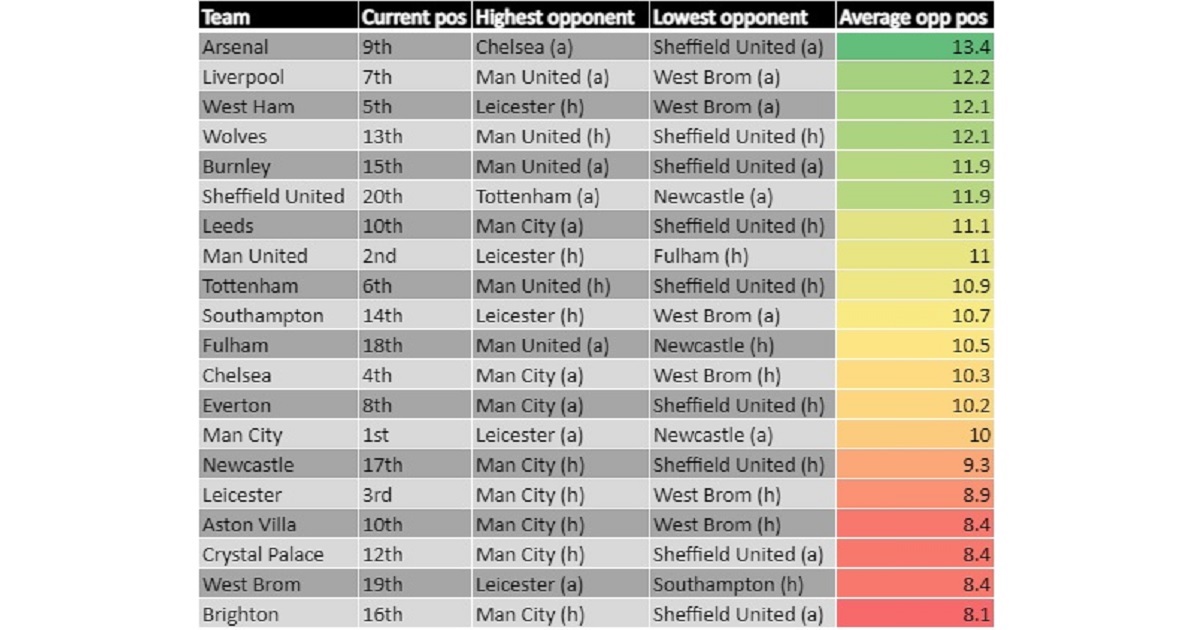 We are now in the final straight of the Premier League. With only eight/nine/ten games left of the season, we can look at the run-ins and work out who now has the advantage in the race for European places and against relegation…

* Liverpool’s next four opponents lie in 9th, 10th, 11th and 17th place. If Liverpool can gather together any kind of form at all, they could put serious pressure on those above them in the table. All they need is momentum.

As it stands, Liverpool are heading into the UEFA Conference League.

* West Ham could also exert some serious pressure from below – they have now finished with both Manchester clubs and their final three games are all against bottom-half opposition.

* Is Leicester’s cushion comfortable enough? They contrived to throw away an eight-point advantage over Manchester United last season and now the gap to West Ham is just seven points. And they still have to face every other team in the top six, including a final three fixtures against Manchester United, Chelsea and Tottenham. This could truly be squeaky bum time.

* You absolutely know that Jose Mourinho will be looking at Tottenham’s run-in – they face Leeds, Wolves and Aston Villa in a mid-May mid-table run – and will be believing that they can overhaul the Foxes. He could *still* have the last laugh in this stupid season.

Oh and his team is in form. Which feels bizarre.

* It might all come too late for Arsenal but they face only Chelsea who are currently in the top six. Qualifying for the Champions League via the Premier League currently looks like a pipe dream but they should at least cruise past last season’s total of 56 points to claim even a vague sense of progress.

* Now you see how important it was that Brighton beat Newcastle. Barring one visit to Sheffield United, they face no more teams below 13th-placed Wolves.

* Fulham have the run-in advantage over Newcastle but the Toon currently have a game in hand. It’s all set up for a final-day showdown on May 23.

* It’s not over for Sheffield United yet.