Home Mailbox Arsenal are in a relegation fight. Time for Simeone… 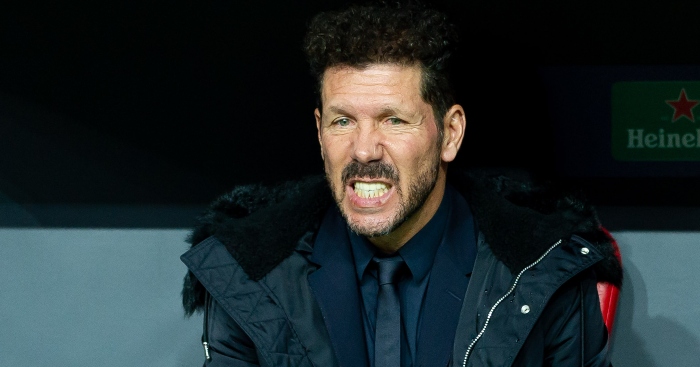 Send your innermost thoughts to theeditor@football365.com…

Freddie’s honeymoon over
This arsenal team will be in a relegation fight this season. Look at the run of games they’ve got coming up. They can’t beat Brighton, wolves, palace, saints at home how will they pick up anything against the better teams. Mark my words, Arsenal will be in the bottom 5 at the end of January.

The players have given up, there’s not even professional pride in the performance. Arsenal are the only team unable to give a reaction after an embarrassing defeat, they just wallow in their own mess. Every other team in the league is at least capable of ‘giving it a go’ for a game, just being bloody minded for 90 mins, running their socks off etc. They may still lose but it’s a reaction, it shows there is still life. Look at Southampton after they lost 9-0, they gave up in that game, but after they went to City and have them a damn good game. They lost but their pride gave them a performance. Arsenal don’t have that.

This is a long way back for Arsenal. Off the ball problems have existed for 10 years and never been addressed. We never out run opponents, were always second best to 50/50’s – even when we win a game it’s like that. There is no pace, power or mobility on the team, couple that with a lack of leadership, intelligence and ability to learn and you have a recipe for relegation

The saddest part is the fans have gone beyond anger and frustration. Being lied to and taken for mugs for 10 years means there is just apathy and empty seats.
Rich AFC

…Go get Diego Simeone – I don’t care how you do it – just get it done.

The stars have somehow aligned so that the manager I’ve wanted for years could be available so Arsenal simply must bring him in.

We’re wasting time giving Freddie any more games. The problems stem from the back so let’s the guy in that can sort it out.

It’s 1996 in reverse. Back then we had an amazing defence but there was a disconnect in midfield but now we’ve a brilliant attack but a defence that simply doesn’t look as though they know what the hell they are doing.

Recruit Simeone, put round pegs in round holes, and let’s push for the Europa League.

There will be those that ask why he’d come but we’re the biggest club in the greatest city in the world – why the hell wouldn’t he?!
Graham Simons, Gooner, Norf London

“It’s obvious that nervousness from the home crowd can affect players no matter what quality they have.”

Don’t let that door slap you in the ass on the way out, Freddie. Nice try. Briefly.
Steve, Los Angeles.

…You know how the Kroenke’s treat Arsenal very much as just a business. Well can they fucking do that with the players and coaching staff as well. At a normal business if the employees were doing this poorly they’d restructure the managers and some of the staff under them. That’s exactly what we bloody need right now.

Why would anyone expect Ljungberg, Arteta or Vieira to improve things significantly? They simply don’t have the experience necessary. We need a manager with deep experience, particularly with a club in free fall, to stem the tide. I want someone who will drill the players non-stop to mark the opposition, cover open spaces, hold the line and be aggressive in the air. I want every player to wake up at 4am to Diego Simeone bearing down on them shouting at them about how to defend properly.

It’s about damage control right now. We have to tighten up and I don’t care how ugly it is. Players like Ozil who have slacked off defensively need to be disciplined into putting in a shift defensively. This isn’t the 80s anymore where a team could get away with a number 10 playing the passes but losing interest defensively. Every player has to defend tightly.
Vish (Melbourne, Aus)

…With all the talk of Emery and who his replacement may be I would like to suggest that it will make no difference who their manager is until Arsenal solve much bigger problems.

Arsenal have close to a million pounds worth of wages per week currently contributing nothing to the team. Whilst they may be able to afford the waste of money I think the impact this has on squad morale is vastly underrated.

How must a player feel when he looks across the dressing room and sees someone paid 5 times what he is but puts no effort in and contributes nothing. What is there to motivate that player?

You could argue that he should play for the shirt or the fans, but Arsenal’s fans are not exactly known for their loyalty. The owners of the club have shown no real interest in the fans or moving the club forwards so why be motivated to play for them?

The only thing I can think that would motivate someone to play for Arsenal at the moment is personal pride, but then when everyone is underperforming there are plenty of excuses to avoid blame yourself.

The idea that Arsenal would appoint Allegri, Rodgers, or whoever, and all their problems would be fixed is laughable.
Joel

…Most clubs get a bounce when they sack a dysfunctional manager. How very Arsenal that they can’t even get that right.
Martin

JAR-ing
This craic of appointing club “legends” (basically decent players that the fans were kinda fond of) from Scandinavia isn’t working out too well for United or Arsenal…it’d be like if Liverpool made John Arne Riise the manager!
Sean Kevin, Limerick

Brucey bonus
Don’t know how many of you Amazon Primed your way to Sheffield United 0-2 Newcastle United, but it was something of a masterclass from Newcastle’s manager–I think his name is Stefano Bruci or something like that. Basically, the visitors scored in the 15th minute and defended the rest of the way, winning easily with 26.6% possession. Next stop: Inter.
Peter Goldstein, Pennsylvania, USA

…You won’t find a bigger fan of Rafa than me but let me tell you Steve Bruce is doing one hell of a job. The lads are playing really well at the moment.

And I watched the Arsenal Brighton game too.

Will we be hearing from Stewie Griffin any time soon?
JHAruba (NUFC)

Love VAR!
I won’t pretend I know the rules when it comes to assistants flagging / not flagging in the VAR era.

But if it allows me to see Jonjo make a forward run from inside his own half, showing the referee a clean pair of heels (a la Ozil/Barry), before cooly slotting it beyond a keeper who’s trying to make it look like he wasn’t trying, then I’m all for it.

Also, it’s lovely to see our 2nd string back 3, showing our 1st stringers that the gap in quality isn’t as big as they probably hoped it was.
Ratt Mitchie, (Love VAR Love VAR Love VAR) NUFC

…Well well well, last night was interesting, many a player would stop when the flag was raised but fair play to Jonjo Shelvey for simply carrying on and putting the ball in the net under zero pressure, VAR rules it onside and everyone learnt a lesson, just play to the whistle, it was a bit strange to watch though.
Mikey, CFC

Pog-back?
Patrick, Stateside. Do you actually believe that Pogba is going to be back in this United side? There is a video of him shooting a sweet jump shot from the edge of the key in Miami, then RUNNING off celebrating, there is f*ck all wrong with him. He is being paid to take the p*ss out of us, which the board have to go along with because they stupidly backed him vs Mourinho.

Say what you want about Jose but he can spot a virus from a mile off, that is exactly what Paul Pogba is….A Virus. Sell him for as much as you can get and get some bodies in that midfield so we don’t have to see Lingard again either.
Ben, Manchester.

Mane’s left foot
Some people spend their time on the tube pondering how their day will go, or making the choice between Pret or Starbucks for their morning brew.

His debut goal against Arsenal. The hit against City from a few seasons back.

He hits them better with his weaker foot.

Has the mailbox got any other “weaker” foot specialists?
Sam, London, LFC

Pep raising Liverpool’s standards
I’ve got to hand it to Pep and his team of merry men. The sheer absurdity of their last two seasons has had an unbelievable effect on the league. Without that dominance, without what looked like a long lasting monopoly on finances and recruitment, without the blatant disregard for FFP publicly and possibly without that distasteful video of the staff & players singing about assault fans as their celebratory song of choice. I don’t think Liverpool would be doing what they are doing currently. They have propelled my own clubs standards to levels I only dreamed of in the last 30 years. Credit it to them. They have raised the bar substantially and demanded near perfection from any opponent that dares to challenge self confessed and possibly justified “GREATEST TEAM OF THE PREMIER LEAGUE ERA”.

40% of the season has passed, 2 points have been dropped!

Let that sink in….

Its far from over once we are involved (as history has cruelly thought us time and again), but my god this is some ride.

So thanks Pep, Razz & co, Sheikh guy, the PR team you are the perfect Ivan Drago (Not that anyone wants an Ivan Drago but as we all learned sometimes you need an Ivan Drago).

See you all on the 4th of the 4th for our very own Rocky 4.
Luke

Drunk on life
It’s Friday afternoon. Liverpool FC are eight points clear at the top of the first tier of all England and Wales football leagues. Got 82 points in my fantasy team this mid week, bumping me to fourth and a possible Champions League spot in our little league. Wednesday booked off so that I can pound beers with gay abandon in the loving company of my mates while watching us play Salzburg in the crazy hours of Tuesday night. Without worrying about work on Thursday morning. Christmas cheer is around. The wife loves me in spite of me being me. Gosh I am happy to be alive. And Mane is an absolute legend. And I love you F365.
MK (guess what team I support) Manila, Philippines

Brilliantly bonkers
Can we all just take a moment to reflect on the utter ridiculousness of this season’s table for every team from 5th to 20th .

Everyone is just lurching from 1 extreme to the next and I’m finding it very entertaining,
Roode, MUFC

I’m chuckling at the fact that people are getting puzzled by it!
Kieran, CCFC