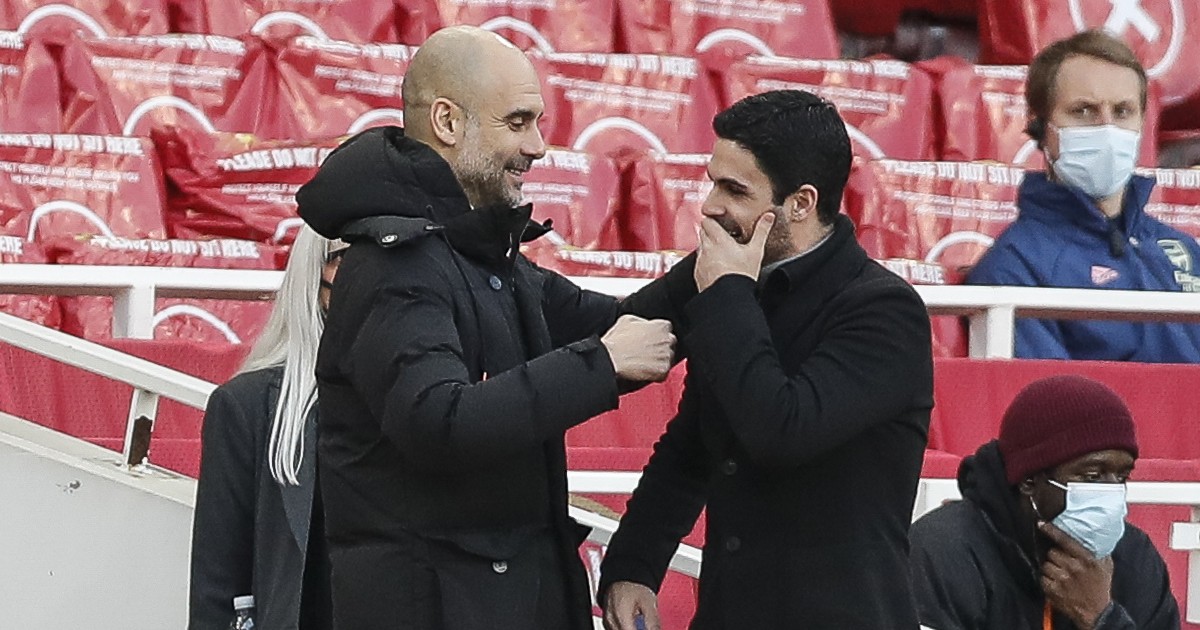 Arsenal will offer Mikel Arteta a contract extension to ward off any possible interest from Manchester City.

The Spaniard will enter the final 12 months of that deal at the end of the season but Arsenal are ‘happy’ with his performance and ‘eager’ to keep him.

The club hierarchy is ‘confident’ that Arteta has them on the right track and the Daily Mail expect a new deal to be tabled before May.

They cite his impressive ‘off-field leadership’ as being particularly persuasive, with Arteta having been crucial in convincing players to take a pay cut at the start of the pandemic, while fronting the club’s defence over their controversial recent Covid postponements.

So ‘conscious’ are Arsenal of Arteta and Manchester City manager Pep Guardiola’s contracts both expiring in 2023, that they want to ensure they keep hold of the 39-year-old even if he ’emerges as a successor’ at the Etihad Stadium.

The Gunners plan to offer a two-year extension which would include Arteta receiving a raise on his current annual salary of £5m.

The Athletic have previously reported on Manchester City’s interest in Arteta, who served as Guardiola’s assistant from July 2016 to his appointment at Arsenal.

They claim that Etihad chiefs ‘have been keeping tabs’ on Arteta’s development since he left, with both he and Crystal Palace manager Patrick Vieira ‘in their thoughts as a potential successor’ when Guardiola leaves.

‘The City Football Group model values coaches they know who are in tune with them and their system,’ that report adds. ‘Previous experience within CFG, allied to impressive work at another club, would make them strong candidates for consideration.’

Arteta wants Arsenal “to get back on track quickly” after defeat in the Carabao Cup semi-final to Liverpool.

“We’ve done a lot of good things. It was not enough to win the tie over two games against them and this is the level that I will have to look for.

“We are here to win football matches and that’s the pressure. We know the amount of matches that we’re going to have to win if we want to be there but you can’t look too far ahead.

“A lot has happened in recent weeks, it’s been extremely difficult to manage the squad and the team because we’ve lost a lot of players and we have to reunite, we have to win on Sunday and look from there because then we have a window and hopefully we can get some players back.”

Arsenal face Burnley at home on Sunday, the Gunners currently sitting in sixth and two points off West Ham with a couple of games in hand.