Home Arsenal Arsenal ‘barometer’ is to perform better than champions 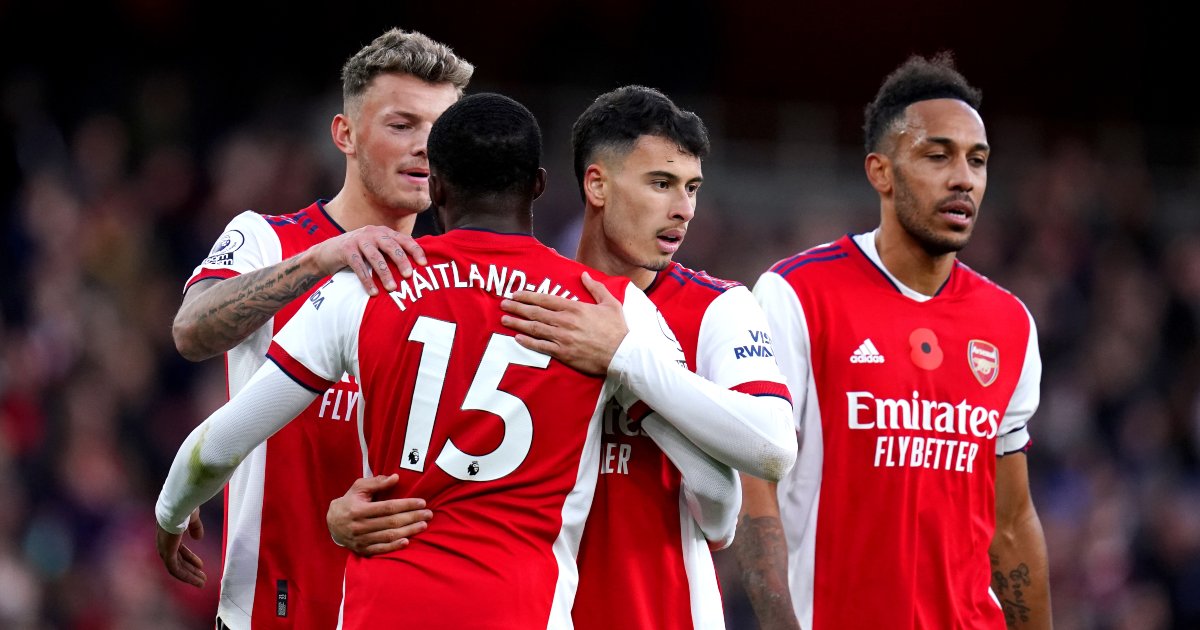 The most old man intro ever?
‘The FA will need a new library at Wembley soon. Just to keep all Harry Kane’s England records in one place.’

So, so many questions but the overriding one is ‘what the actual f***?’

Mettle detector
Stan Collymore’s grasp of maths and statistics has always been shaky, to say the very least. More steadfast is his mistrust of Arsenal, a club he described as “too nice for its own good” in August. Then in September he predicted that Nuno Espirito Santo would get Tottenham back into the Champions League while “down the road at ­Arsenal, I just don’t see them ­getting back there while Mikel Arteta is in charge”.

‘But to anyone who thinks this clash will be any sort of barometer of their progress I’ll say, ‘No, it isn’t’.’

They haven’t even got a point at Anfield in almost six years so it is surely some kind of barometer, Stan. What do you want?

‘That will only be determined if they can go on a run of 10 games unbeaten from early February to late March when the mental and physical fatigue kicks in. That’s when they can show us what they have got.’

b) Only half the last ten actual Premier League champions have remained unbeaten between early February and late March.

c) Manchester City – by any measure the best Premier League team of the last decade – have only three times remained unbeaten between early February and late March within that timeframe.

The value of Sterling
Sticking with Arsenal and Manchester City, the Mirror website has discovered a goldmine with this beauty of a headline:

Translation: Martin Odegaard might play even less at Arsenal if the Gunners spend £80m on Raheem Sterling.

What is never explained is why the hell Arsenal would pay £80m for Sterling, who is out of contract in 18 months’ time. The only reference we can find to that price tag is on fellow Reachers football.london, who wrote that Sterling ‘is valued at £81million on football database Transfermarkt’ last month.

Now Mediawatch loves Transfermarkt with all its cold, cold heart but its valuations make almost no sense. For example, try and buy Phil Foden from Manchester City for £72m.

Is their dodgy algorithm the basis for this ‘£80m Arsenal transfer plan’? It seems so. What’s really odd is that the Mirror claimed that Sterling’s price was £45m literally three days before.

Why are we still surprised by the level of this shit?

Ronaldo Ronaldo Ronaldo
Manchester City themselves do not generate a volume of web traffic to match their actual achievements, so that’s why the City writers on the Manchester Evening News will crowbar in just about any trending topic to generate some clicks. This might be the worst/best example yet:

It takes Ross Jackson eight paragraphs to even mention Bernardo Silva after a journey through Manchester United, Ronaldo and Nicolas Cage that no doubt scored him extra points in the ‘drag people down as far as a couple of adverts at least’ stakes. Gold star for you.

Then it turns out that the premise of the whole piece is that Bernardo was ‘selfless’ during Portugal’s defeat to Serbia by asking to be taken off, which is something Ronaldo would never do.

‘A player who could quite easily see out the 90 minutes asking to be taken off because he believes one of his teammates could help the team more than him? Isn’t Bernardo just the best bloke in football?’

Could he ‘quite easily see out the 90 minutes’ or was he literally not fit after missing Portugal’s previous World Cup qualifier and several days of training because of a muscle injury? Odd how the small matter of his injury is not mentioned in this discussion about the ‘best bloke in football’ that really was just a means to the rather profitable end of crowbarring Ronaldo into a headline and dragging Manchester United fans into a City story.

Red issue
Steven Gerrard was asked about Aston Villa’s trip to Liverpool in his unveiling to the press and tried his damnedest to dampen what he called “the noise”; after all, Villa have four Premier League games between now and December 11. He even said his status as former Liverpool captain and presumed manager-in-waiting is “not important”.

Silly, silly Stevie, trying to kill a narrative that will not be slain.

Headline on the back page of The Sun: ‘Red alert sounded by Gerro.’

Opening line of Graeme Bryce’s report: ‘STEVEN GERRARD is relishing his return to Liverpool – and wants all three points.’

Bryce then writes that the date is ‘ringed red in his diary’ because when it comes to The Sun (but particularly The Sun and Liverpool) it absolutely does not matter one tiny little iota what Gerrard actually, you know, said.