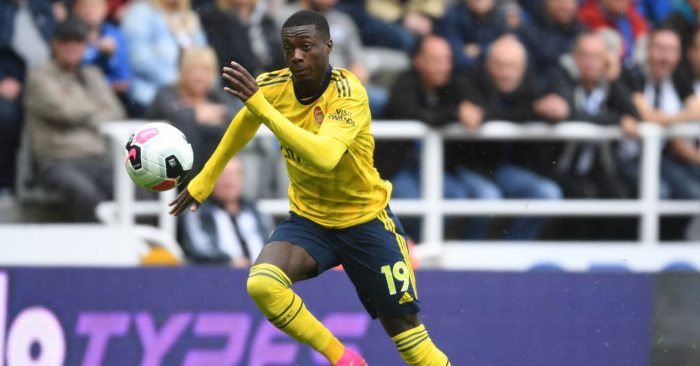 Arsenal’s reported summer bid for Wilfried Zaha was made to put pressure on Nicolas Pepe to agree terms on a move to the Emirates, reports claim.

Pepe joined Arsenal in a record £72million transfer from Lille during the summer.

Discussions between Pepe’s team and Arsenal began in February, as The Gunners laid the groundwork for their summer deals well ahead of time, reports The Athletic.

Zaha handed in a transfer request in a bid to force his way out of Crystal Palace, but The Eagles were reportedly angry with Arsenal’s valuation of their star forward.

After a £40m opening bid was submitted, Palace described the offer as ‘derisory’, but it The Athletic claim Arsenal were merely trying to put pressure on Pepe’s team to make a decision.

Pepe has failed to hit the ground running at Arsenal, after a promising start.

He cut a frustrated figure in Arsenal’s draw with Manchester United on Monday night and admitted his confidence is low.

“[My start] It’s not been easy, we must tell the truth,” Pepe told RMC after the game.

“I’m not good enough in my stats or my usual form, it’s not the same as in Lille or during the Liverpool match early in the season.

“The confidence must come back. I am not very worried. People may be worried about statistics, but I’m not.

“I have to keep working because the level is different, so is the language. It’s a new championship for me. I have to adapt quickly but it will not be long.”