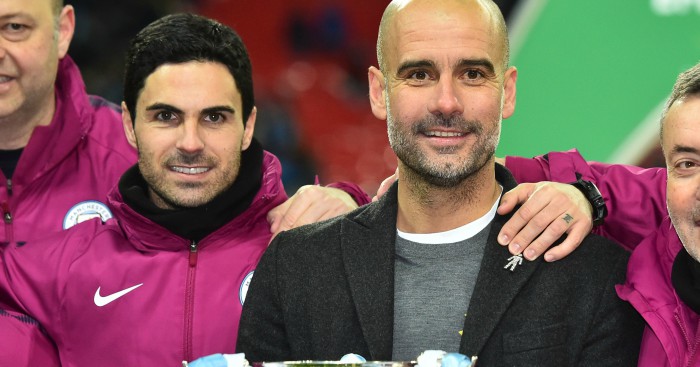 Arsenal boss Mikel Arteta laughed off a question about tactical fouls and called for journalists to direct questions back at his former boss Pep Guardiola.

The Manchester City manager has refused to say that he instructs his players to commit a foul if they cannot win the ball back fairly as part of the tactics that have dominated English football for the last two years.

After United coach Ole Gunnar Solskjaer (again) raised the issue this week – as Jurgen Klopp, Jose Mourinho and Manuel Pellegrini have previously – Guardiola was asked about footage from the Amazon documentary during their 2017/18 season

Arteta was filmed telling the team’s midfielders to ‘make fouls if there is a transition’, and Guardiola responded by telling the journalist to go and ask Arteta about it before coyly refusing to deny that he wasn’t aware of the instructions.

The new Gunners boss was put on the spot ahead of Arsenal’s game against Crystal Palace and replied by putting the ball back into Guardiola’s court.

“It was the wrong clip on Amazon!” he said.

“I will ask the journalists to go back to Manchester and ask [Guardiola] the same question again.”