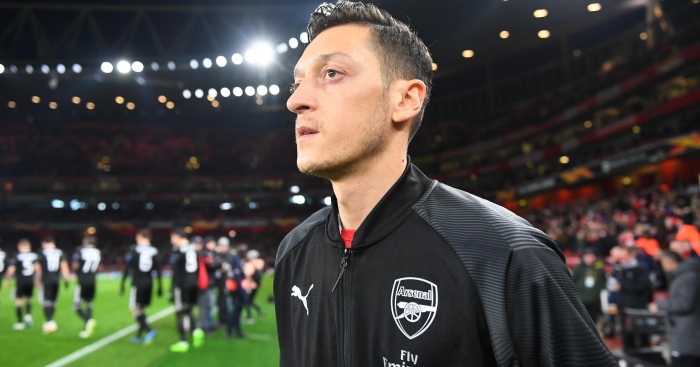 Head coach Unai Emery believes Mesut Ozil has a future at Arsenal – but did not rule out a move away after insisting the German will not be given special treatment just because he is the highest-paid player at the club.

Ozil did not make the substitutes bench for the Carabao Cup quarter-final defeat to rivals Tottenham in midweek and has been on the fringes of the team in recently.

He missed four games with a back problem but has started just once since November 11 – and that was a Europa League dead rubber at home to Qarabag.

The 30-year-old was a mainstay in the Gunners side under previous manager Arsene Wenger but Emery has shown he has no issue with keeping Ozil on the sidelines.

Ozil’s lack of game-time has led to rumours linking him with a January move away from the club – although when asked if the former Germany international has future at Arsenal Emery replied: “Yes, why not?”

He then refused to rule out a transfer away from Emirates Stadium for the forward and said Ozil will be treated the same as any other member of his squad.

“I am not thinking about this situation,” he said when asked if Ozil could leave when the transfer window opens.

“He has scored three goals, he give us assists. Some matches we need different things tactically and individually. It’s not only for him.

“Every player, I want to give them the same conversation or the same decision for play or not play.

“And then when I decide they are not to play because of a tactical decision, it’s with him and another.

“If you are asking this is different because one is with more salary and the other is less salary, for me it’s the same.”

Emery managed big-name players on lucrative contracts during his time at Paris St Germain, where the likes of Neymar, Edinson Cavani and Kylian Mbappe.

While dropping Ozil has led to a lot of interest in the relationship between player and manager, Emery insists he is only concerned with what is best for his Arsenal side and not what others think as the Spaniard revealed Ozil is back in the squad for Saturday’s visit of Burnley.

“I don’t think how they are going to think outside (the club),” he added.

“I can explain here clearly my decision why. For example, for tomorrow every player is okay in the squad, for trusting in them to work the match tomorrow.

My focus, my plan with them is to do the best match. If Mesut is in the first XI, the same. Trust in him help us with his quality.

“Mesut is okay (to face Burnley) I trust in him, I trust in our team, our players. We are going to play. Our game plan tactically, individually the best performance individual and to continue pushing with the players, giving them confidence, to take responsibility, rhythm.”