Home All The News Arteta ‘fancies going into battle’ with Man Utd over ‘No.1 target’ 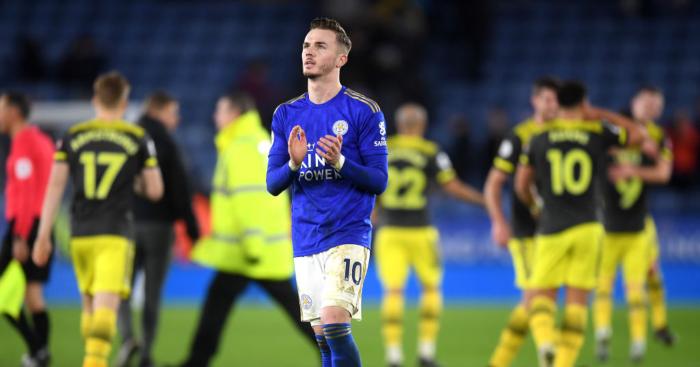 Arsenal boss Mikel Arteta wants to rival Manchester United for the signing of James Maddison, according to reports.

A lot of the transfer talk surrounding United‘s need for a creative midfielder has centred around Maddison‘s availability at Leicester City.

Any move, particularly in January, seems extremely unlikely. Not only because of the reported huge fee the Foxes will no doubt demand but also the league positions of the clubs and Maddison’s happiness at the King Power Stadium.

However, the Daily Star says Maddison will be United’s ‘No.1 transfer target’ in the summer as they are ‘prepared to spend £80m to get the attacking midfielder on board’.

The Sun, though, doesn’t think Man Utd will have a clear route to Maddison with Arsenal now looking at the Leicester midfielder.

The report says that Gunners boss Arteta ‘fancies going into battle’ with United for Maddison with a bidding war likely to raise the price past the £90m that the Foxes want for Maddison.

Any move for Maddison from either club is likely to come in the summer and The Athletic journalist David Ornstein recently told The Ornstein & Chapman Podcast what Arsenal fans can expect in the January transfer window.

“I don’t know what assurances he was given, Mikel Arteta,” Ornstein said.

“But Arsenal are looking to make one to two loan signings during this January transfer window.

“They’re not close on any of them just yet I’m afraid but that’s in keeping with what we’ve been talking about with the rest of the league.

“It would be a maximum of one to two loans from what I’m told.

“Arteta feels he has a strong squad, especially when players come back from injury.

“My information is that one of those positions they are looking to fill is left centre-half, with a loan deal.

“There’s also suggestions possibly of a central midfielder and maybe someone to cover in the full-back areas, with the injuries they’ve got there.

“They spent heavily last summer, so that’s got to be factored into the equation, especially around FFP.

“They, like many clubs, much prefer the summer window, so you can expect Arsenal to spend again next summer.”