Home All The News Wenger: I replaced Campbell as he ‘started to tire’ 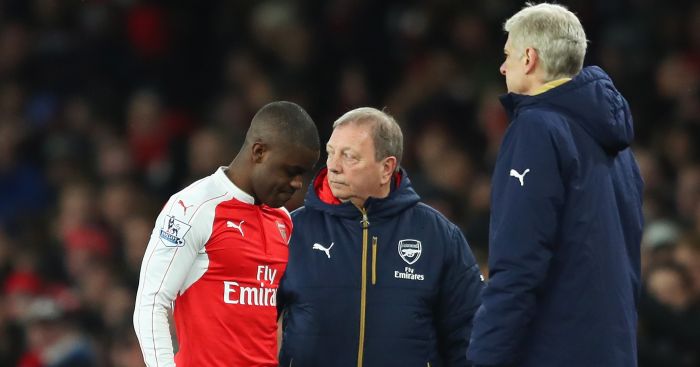 Arsenal manager Arsene Wenger says he replaced winger Joel Campbell in their home loss to Swansea because the goalscorer was ‘starting to tire’ after not playing for a while.

Arsenal saw their Premier League title hopes take a huge blow after goals from Wayne Routledge and Ashley Williams guided the Swans to a 2-1 win over the Gunners at the Emirates Stadium.

Campbell put Arsenal in the lead in the first half after being played in by Alexis Sanchez, and Wenger’s decision to substitute the Costa Rican in the second half was met by a ring of jeers and boos from the home supporters.

Campbell, who made his first league start in a month, was replaced by Danny Welbeck in a bid to secure all three points, but Arsenal fans were far from happy with the decision to take off Campbell who remained a huge threat.

3 – Arsenal have lost three consecutive games in all competitions for the first time since April 2010. Feeble.

But Wenger has defended his decision to take off the 23-year-old, claiming Welbeck was more likely to pose a “very dangerous” threat.

“Campbell hasn’t played for a while and he started to tire,” said the Frenchman.

“He played against a very young left back and I thought Welbeck could give him some problems with his runs in behind. These kinds of decisions don’t mean that Campbell did badly. I think he did quite well tonight.“I also think that there was room on that flank to be very dangerous.”Arsenal are now six points of the top of the Premier League and face a crucial north-London derby against Tottenham at White Hart Lane this weekend.

A win against Spurs would put the Gunners on level points with their rivals, but a defeat would potentially put them within a point of dropping out of the top four.

Wenger has been dealt with a huge early blow ahead of the derby after it was confirmed Petr Cech and Laurent Koscielny will miss the game through injury.