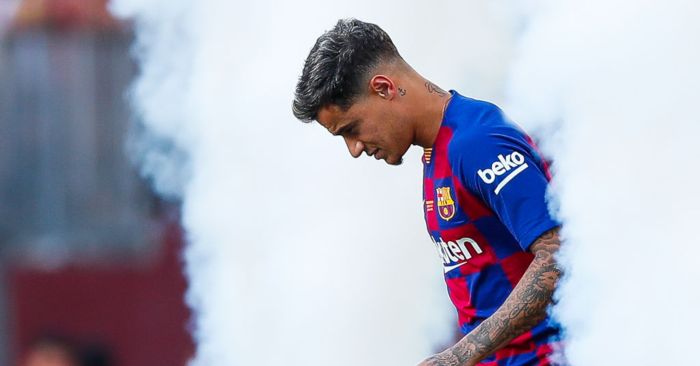 One of the most impressive things about Liverpool’s last two Champions League triumphs is that, on paper at least, they were arguably weaker than they had been as year or so earlier. Certainly in both cases, they had to recover from damaging squad departures.

In 2004, Michael Owen left Anfield for Real Madrid, only to watch on from afar as his former teammates achieved immortality in Istanbul. And having lifted their sixth European crown in Madrid last season, Jurgen Klopp’s Reds finally achieved something to mark their greatness, avenging defeat at the same stage to Los Blancos 12 months prior. But in January 2018, the sale of Philippe Coutinho to Barcelona was supposed to derail the gegenpressing train.

Almost any player on the planet would have their head turned by Spain’s big two in the same situation, so no blame can lay at the doors of Owen or Coutinho for moving at the time, yet both men stand as examples of what can happen when things don’t work out. The England striker enjoyed a fine debut season at the Santiago Bernabeu, scoring 16 goals in 45 games and 26 starts, but a lack of regular first-team action with the World Cup in sight and poor integration into Spanish life soon brought him back to England. But the door he had wanted to open, back to Merseyside, was locked. He joined Newcastle United, where injuries took their toll, and eventually signed for Manchester United as his dwindling reputation at Anfield reached the point of no return.

Coutinho, meanwhile, had pushed for his move to Camp Nou for some time, but it didn’t work out the way many expected – for the player or the clubs.

Rather than causing Klopp’s work in progress to falter, they were inspired, and the £146million fee paid by Barcelona helped fund the signing of Allison and cover deals for Virgil van Dijk and Naby Keita. Minus Coutinho’s magic and creativity, Liverpool headed into last season more balanced all over the pitch; instead of hindering their bid for domestic and European success, Coutinho’s exit paid for it, in a sense.

Victory over Barcelona in the semi-final, including a 4-0 win on the Brazilian’s Anfield return, made it all the sweeter for the Kop. Yet, with just days remaining in the transfer window and no major signings through the door, it would be interesting to see whether they would take him back.

The memory of Liverpool lifting the trophy he left in pursuit of is among the least of Coutinho’s problems. He finds himself marginalised in Catalonia, on the sidelines and facing the very difficult prospect of a season in the shadows. The dream of emulating his hero Ronaldinho and playing alongside Lionel Messi was an easy one to chase, but once he got it, reality bit hard. There was no time to settle, certainly not when that money had been paid, and at Barcelona, price tags have never been a guarantee of anything. Excitement over his signing was fleeting: once he had been unveiled at his showpiece occasion in front of the media, he had to get to work as just another player.

A star? No way, not when Messi is around. His best hope was to perform well and thrive away from the limelight. At worst, his mistakes would be analysed with a microscope by some of the most demanding supporters in the world.

Whistled regularly by the Camp Nou crowd last season, it became evident that Coutinho’s time had run out and his window was about to close.

Over the last decade, Barcelona’s mission has been to find Messi’s ideal foils. They cracked the code before Neymar left for Paris Saint-Germain; his relationship with the Argentine and Luis Suarez was incredible, on and off the pitch. But his replacement would only get a short time to stake their claim. Ousmane Dembele, who also cost well over £100million, has failed, and now it is the turn of Antoine Griezmann.

Form is temporary, class is permanent, rings true in England, but it doesn’t apply in Spain, the place where dreams are made because patience doesn’t exist. If you fail, the next man is already lined up to take your place. Coutinho’s story is very similar to Owen’s on the surface, but while the latter was never the jewel in Madrid’s crown, in Barcelona, Coutinho had demands to shoulder.

That isn’t to say he shouldn’t have to take responsibility. His work-rate has often been questioned but he, like many others, hasn’t been able to handle to intensity of playing for one of the most high-profile clubs on the planet. His confidence is as low as it has ever been, and only a move will bring it back, preferably to the Premier League.

Time is of the essence.

It can also be argued that, for all their development in other areas, Liverpool have never really filled the hole left by Coutinho. They have a very energetic and functional team, perfectly tailored to Klopp’s tactics, but they still lack a certain spark. Other than adding another option in attack in case of an injury to Mohamed Salah, Sadio Mane or Roberto Firmino, a playmaker was deemed the most important piece of a near-complete puzzle and potentially the difference in attempting to overturn the one-point deficit to Manchester City in the Premier League last season.

Is a return to Liverpool ideal for everyone? Perhaps, but Coutinho is crying out for a return to England generally. His quality remains unquestioned, and he still has so much more to give, but he needs to be loved; nobody loves their players quite like supporters in English football. Dribbling off the left is his strong suit, but he was incredibly effective at driving deep from the middle of the pitch and picking the right pass in happier times at Anfield.

It seems a long shot now, but a loan has been mooted. Arsenal would be a wonderful fit. If it doesn’t happen, Philippe Coutinho faces up to a season on the sidelines, watching on as a stale hero who drifted in the land of instant gratification.