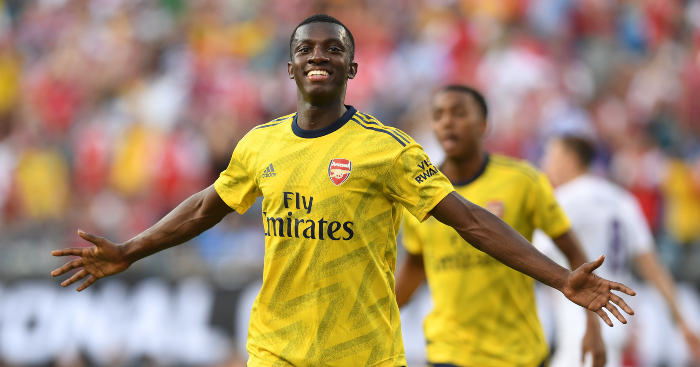 Arsenal are reported to be willing to let Eddie Nketiah leave the club on loan before Thursday’s transfer deadline.

Nketiah managed five substitute appearances in the Premier League last term in addition to a couple of Europa League starts. But his first-team chances are likely to be limited further this season following Nicolas Pepe’s arrival last week from Lille.

The BBC’s David Ornstein reports that Unai Emery has changed his stance on Nketiah and is now willing to allow the 20-year-old to leave the Emirates on loan to get senior experience.

Highly-rated 20yo striker Eddie Nketiah set to leave Arsenal on season-long loan. Bristol City among a number of clubs in talks to sign England youth int’l. Currently no firm offers for defender Shkodran Mustafi & he wants to stay – but foreign teams have longer to do a deal #AFC

Bristol City are said to be leading the race for the forward, though The Athletic’s Leeds United scribe Phil Hay reckons Marcelo Bielsa is also interested.

Another possibility emerging for Leeds United – 20-year-old prospect Eddie Nketiah at Arsenal. Understand he's being considered if the club opt to take an out-and-out forward over Ryan Kent. #lufc

Leeds are also interested in Liverpool wide player Ryan Kent, though the Reds are reportedly only interested in a permanent deal and they want £10million for the former Rangers loanee.