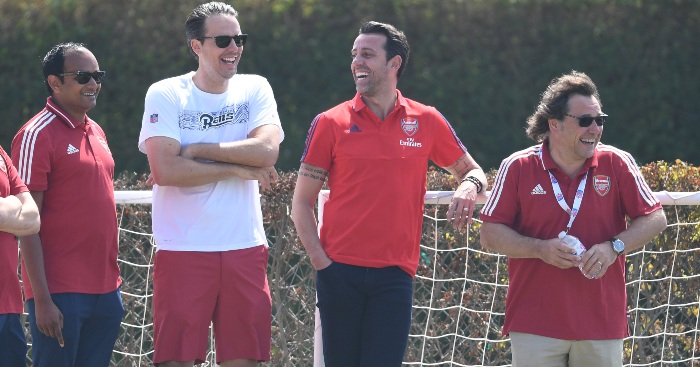 Arsenal’s new technical director Edu wants everyone at the club to return to the winning mentality which made Arsene Wenger’s side invincible.

The Gunners are preparing for a second campaign under new head coach Unai Emery, who guided them to the Europa League final but could not deliver Champions League football.

Former Arsenal midfielder Edu has been appointed to the newly-created role, which the club said will see the Brazilian “coordinate the work of our first-team coaching group, the academy and player scouting and recruitment in order to oversee the constant building up and efficient strengthening of our squad”.

The 41-year-old was part of Arsenal’s unbeaten ‘Invincibles’ squad of 2004 which won the Premier League under Wenger, and later went on to play for Emery at Valencia.

Edu left a similar role with the Brazil national side following their Copa America success and has now linked up with the Gunners again on the club’s pre-season tour in the United States.

While he accepts it will not be an overnight change in mentality, it is a process Edu believes is vital if Arsenal are to compete for top honours once again, both at home and in Europe.

“To work with a strong mentality, you don’t do it like that (instantly). You build a good mentality,” Edu said in an interview with Arsenal Media.

“When you talk about mentality, it’s not only the players. The club has to have the same mentality of the players.

“We have to have the same mentality, and the mentality of Arsenal, we always had to have winning in front of us. That’s football. That’s the real world. When you’re talking about good jobs, doing other things, without results I’m not sure (it works). It’s unfair maybe, but the reality is like that.

“Winning… fight for winning, and how do you do that? We have to prepare ourselves. How? By working hard, by giving everything, giving us (a chance) to be better and better, and working really hard to be where the club wants to be.”

Edu recalled how Wenger’s squad would thrive off the continued quest for more success, which spread throughout the north London club.

“I remember we were winning a lot of things, our team was really strong and there were big names around, but the mentality of the group, the guys around, the staff, was so great,” he said.

“We were working hard but at the same time, we were enjoying it. That was important because at the time winning was important, but you have to enjoy it as well and we did that with our group.”

Earlier this week, a group of Arsenal supporters’ organisations, fanzines and blogs published a statement hitting out at Stan Kroenke’s “passive ownership” of the club.

Edu said the Arsenal board “have to understand the fans” but believes that works both ways.

“They have to understand us as well. Because we have a philosophy. The club is changing a lot, so I saw that before I signed up for technical director, I saw the many changes now Arsene has left,” the Brazilian added.

“The structure of the club changes a lot. So that’s a process, and sometimes we need time. I understand that time is going against us but we have to be aware of that. But in the end, we’re going to give to [the fans] some good things I am sure.”