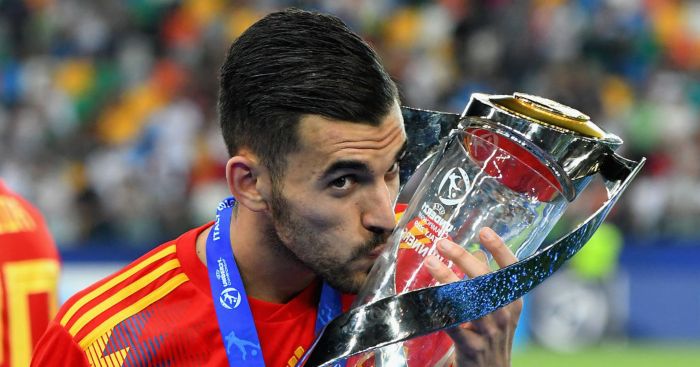 Real Madrid rarely ever compromise and Zinedine Zidane, as he has shown this past week with his treatment of Gareth Bale, doesn’t tend to take prisoners. But what both club and manager do is know what talent looks like and understand the frustrations that may come with it.

Los Blancos have an ideal profile for their top players: in some ways they must look and act in the correct manner. But there are those who make it worth taking a different approach. Dani Ceballos is the perfect example. Not shy of confrontation, he has previously mocked club legend Iker Casillas and told Zidane to his face that he doesn’t want to play for him, while making some rather choice comments about Catalans. As he packs his bags to leave the Santiago Bernabeu this summer, he knows he will be returning soon; business is left unfinished as he heads to Arsenal on loan.

Full to the brim with confidence in his own quality – and understandably so – Ceballos agreed to join the Gunners on the proviso it would only be on a temporary basis because he believes he can still write a legendary chapter in Madrid. His parent club agree, and so Arsenal must take what they are given. Tottenham were also credited with an interest in the 22-year-old playmaker, but the chance to work with Unai Emery and a clearer route into the first team at the Emirates Stadium swung Ceballos’ thinking in the end. Though nothing is signed, sealed or delivered just yet, he is a wonderful fit for that Aaron Ramsey-shaped hole in midfield.

It is quite rare to see this kind of deal agreed at the top end of the transfer market, one that so obviously benefits the ‘selling’ party. There is no option to buy for Arsenal; the idea is for Ceballos to develop and bridge the gap between him and the other Real midfielders. Zidane sees potential for the future while Ceballos believes in himself in the present, hence the rather acrimonious parting of the two, but the long-term plan still has him playing in white.

In Arsenal’s current predicament, with no Champions League football for a third year running and a very small transfer budget in comparison to their direct rivals, it suits them. Crystal Palace winger Wilfried Zaha is still a prime target, while fans are desperate to see their defensive options strengthened. In effect, by paying a reported £3million loan fee, they are gaining a player who would otherwise cost between £40-50million without actually denting the precious budget at Emery’s disposal.

Two stunning performances at the European U21 Championships for Spain, and the 35 La Liga appearances at the Bernabeu in the two years since leaving Real Betis, suggest he is ready to follow the path laid by Cesc Fabregas and David Silva for diminutive, technical midfielders to succeed in England. Ceballos is not the same type of player as the departed Ramsey. He won’t arrive late in the box to score like the Welshman, but as someone who can play as advanced as a No.10 or as deep as a No.8, he will freshen up an area of pitch that needs something new. Emery has options there, with Mesut Ozil and Henrikh Mkhitaryan available, but both are ageing and have struggled to hold down a place under the Spaniard. Ceballos could be the catalyst for positive change.

The simple fact of the matter is Arsenal cannot afford to improve everywhere they need to, and with that in mind, their pursuit of Zaha has been legitimately questioned over the past few weeks. Two bids have been shunned for the Ivory Coast winger, and while pace in wide areas is something that needs to be injected into the side, there is a belief the money they do have could be spent a little wiser. Ceballos will offer a new dynamic in midfield, picking little pockets of space, carrying the ball and linking the various different cogs of the machine together. Creativity is never lacking at Arsenal – style has often taken precedence over substance – but they haven’t had this kind of player since Santi Cazorla left last year. And Ceballos is somewhat more physically imposing than his countryman.

Links to Spurs never really got off the ground. His name was only mentioned as a makeweight in a deal to take Christian Eriksen to Madrid. It would have been interesting to see how he would have developed under a manager like Mauricio Pochettino, but his system isn’t particularly fluid and relies heavily upon intensity and energy. Ceballos for Eriksen isn’t a straight swap, and that perhaps would have shown. As it is, the former is about to make the best move for his career, and he could be one to watch: a signing for many a Fantasy Football team across the nation.

In a sense, Real are continuing to show personal growth by not tossing Ceballos aside in favour of a big-name signing. That is the influence of Zidane, who returned to the coaching post under the condition he would have more control than any of his predecessors, and while Bale and James Rodriguez have both been on the receiving end of his ruthless streak, Ceballos is believed to have a future under the Frenchman. It hasn’t been easy for him either, but his promise has at least kept him in the boss’ thoughts.

Zidane continues to get the best out of some of Spain’s most talented players – as Isco and Marco Asensio can attest. In Ceballos, he has another waiting in the wings. For now, the Premier League and Arsenal will be extremely welcoming beneficiaries of his talent.