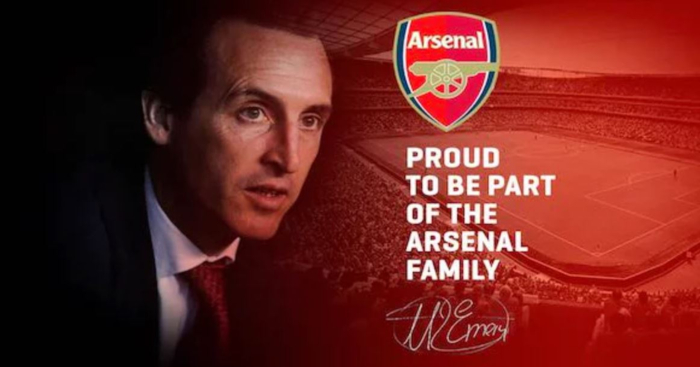 Arsenal have announced former Sevilla boss Unai Emery as their new head coach and the successor to Arsene Wenger.

Emery, 46, left Paris St Germain at the end of the season having won three trophies and will replace Wenger at the Emirates Stadium.

The Spaniard emerged as the shock favourite earlier this week after it had seemed former Arsenal captain Mikel Arteta was in line to land the job.

Instead the role has gone to Emery, who won three successive Europa League titles with Sevilla before moving to PSG in 2016.

Wenger departed at the end of the season following a 22-year reign, with the club finishing sixth in the Premier League.

Emery, who will be unveiled at a press conference at the Emirates on Wednesday afternoon, will work in a head coach capacity at Arsenal.

That follows the appointments of Raul Sanllehi as head of football relations and Sven Mislintat as head of recruitment over the past year.

The club are seemingly keen to steer away from the model formed under Wenger, with Emery now expected to work closely with the pair in an attempt to bring success back to Arsenal.

“I am thrilled to be joining one of the great clubs in the game,” Emery told Arsenal’s website following the announcement of his appointment.

“Arsenal is known and loved throughout the world for its style of play, its commitment to young players, the fantastic stadium, the way the club is run. I’m very excited to be given the responsibility to start this important new chapter in Arsenal’s history.”

Current Manchester City assistant Arteta was widely-expected to be given the task of reviving the fortune of the Gunners.

But Emery appears to have impressed the decision-makers at the club, with chief executive Ivan Gazidis insisting the decision to appoint the former Valencia and Spartak Moscow boss was unanimous.

“Unai has an outstanding track record of success throughout his career, has developed some of the best young talent in Europe and plays an exciting, progressive style of football that fits Arsenal perfectly,” he said.

“His hard-working and passionate approach and his sense of values on and off the pitch make him the ideal person to take us forward.

“We conducted a confidential, wide-ranging and rigorous search involving extensive background references, data and video analysis, and personal meetings with all the candidates we shortlisted.

“All were interested in the position and we were unanimous in our choice of Unai to drive the next chapter of our history.”