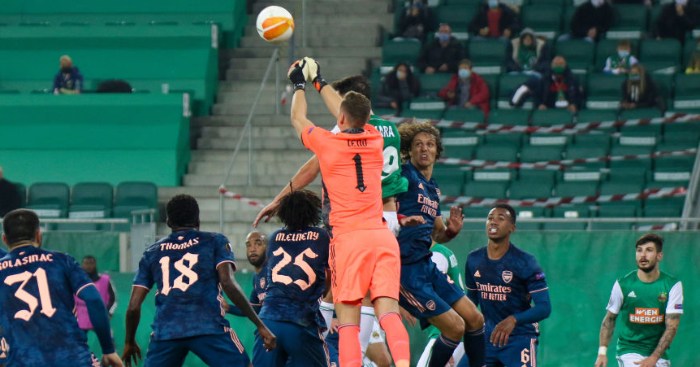 Arsenal star David Luiz has offered his support to Bernd Leno, who made a big error in their Europa League tie against Rapid Vienna.

The Gunners got up and running in the Europa League on Thursday at the Allianz Stadion. Mikel Arteta’s side had to come from behind to beat the Austrian side.

But they scored two goals in just four second half minutes to secure the victory. David Luiz opened the scoring in the 70th minute with a header, before Pierre-Emerick Aubameyang put them ahead in the 74th minute.

Leno gifted Vienna the lead at the start of the second half. He tried to play it out of the back but his pass was intercepted, which set up Taxiarchis Fountas’ goal.

The German international suffered a knee injury in June that kept him out for the rest of last season. He was replaced in goal by Emiliano Martinez.

The Argentinian impressed for Arsenal during the latter part of the season. The Gunners finished the season strongly and won the FA Cup for the fourteenth time.

Martinez was sold in the summer for £20m to Aston Villa. This means that Leno returned from his injury layoff still as Arteta’s number one ‘keeper.

The Gunners boss offered his support to Leno after the game. Speaking after the match, as cited by Goal, Luiz joined his boss in defending Leno:

“I think Bernd is amazing. It is part of our philosophy to build from the back, this is a normal thing.

“You always play to eliminate players from the beginning when you build then it is going to be much easier for the strikers.

“So, if you count how many times it went well… but just one he did wrong and this is part of our philosophy.

“He is great and he gives us the opportunity to play from the back to try to help us.”