Arsenal could be without two players who started the FA Cup final triumph in the Premier League next term. 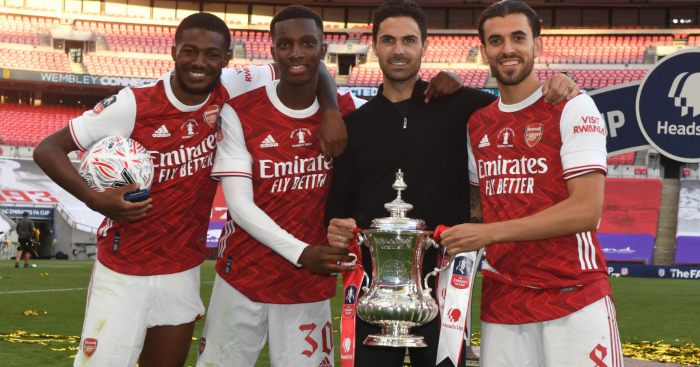 Dani Ceballos is not expected to be at Arsenal next season after Real Madrid decided to recall the Spaniard, according to reports.

Ceballos joined Arsenal last summer and endured a tough start at the Emirates before putting in some bright displays towards the end of the season.

He scored the winner against Sheffield United back in June to send Arsenal into the FA Cup semi-finals, while he started against Chelsea in the final on August 1.

A report previously claimed that the Spaniard was open to staying at the Emirates for another season, with Mikel Arteta also on board.

However, FourFourTwo now claims that Real Madrid are set to recall the playmaker as part of ‘their preseason plans’ ahead of a new La Liga season.

Zinedine Zidane is ‘reconsidering his squad’ after they crashed out of the Champions League to Manchester City at the Round of 16 stage,

‘Ceballos and Martin Odegaard set to return to the Bernabeu to fight for places’ after Zidane was left ‘impressed’ by Ceballos’ performances for Arsenal.

The report adds that Ainsley Maitland-Niles could follow Ceballos out of the club ‘with the 22-year-old apparently feeling untrusted by the Arsenal boss’.

The Englishman ‘is attracting interest from three clubs – two in the Premier League, one in the Bundesliga’ and would like to start playing in a ‘right-wing role’ at his potential new club.