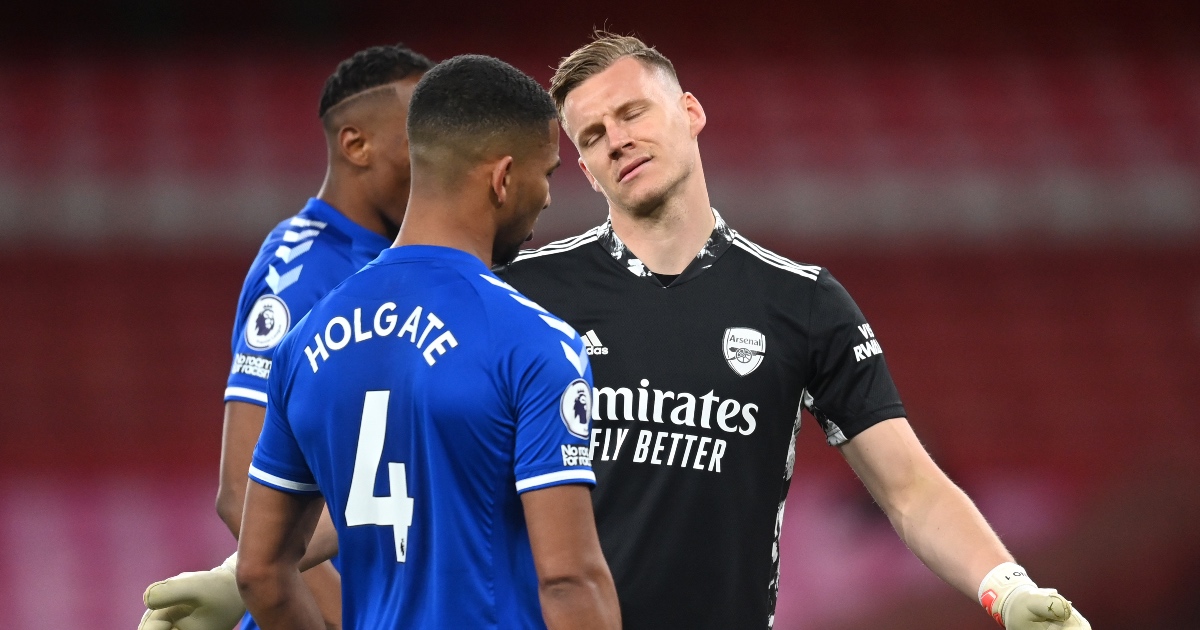 An error from Bernd Leno saw Arsenal slip to defeat to Everton on an evening where home fans marched on the Emirates Stadium to protest against the club’s owners.

The action on the pitch did not rival the pre-match protests, which included fireworks that were missing for large parts of the match itself.

But Everton would leave north London with all three points after Leno turned a Richarlison cross into his own goal to give the Toffees a 1-0 win, their first win in seven games across all competitions.

Much like Chelsea’s stalemate with Brighton on Tuesday, the game was overshadowed by the actions of fans beforehand.

Thousands of Arsenal supporters amassed ahead of the Premier League fixture.

The relationship between fans and owner Stan Kroenke has been tumultuous in recent years but was worsened further still when the Gunners announced on Sunday they had signed up as one of the founding members of a breakaway European Super League.

But the original decision only exacerbated the call from supporters for Kroenke to sell, and they amassed outside the Emirates to call for change.

An effigy of Kroenke hung from a lamp post as supporters let off flares and held up anti-Kroenke banners – chanting for his removal and also singing songs which would usually be heard in the stands.

The protests would continue after kick-off, with Spotify founder Daniel Ek tweeting he would “throw his hat in the ring” if the Kroenkes decided to sell up.

When the action started, the Gunners were denied a penalty by a tight VAR offside call, before gifting the points to their opponents.

Dominic Calvert-Lewin, returning to the Everton side, flashed a header just wide before Bukayo Saka drew the first save from Jordan Pickford at the other end.

Leno then made a good stop to deny Richarlison but needed the frame of his goal to come to his aid and keep out a Gylfi Sigurdsson free-kick, which hit the top of the crossbar.

The former Tottenham man saw a strike deflected behind at the start of the second half as Carlo Ancelotti’s side looked lively.

Arsenal were awarded a penalty as Dani Ceballos went to ground after a challenge from Richarlison but the decision was overturned after a VAR check ruled Nicolas Pepe was offside in the build-up.

Boss Mikel Arteta had said on the eve of the contest that he did not want the turbulent week to be a distraction for his players but – after a number of PR own goals, Leno would provide an onfield gaffe to settle the game with 14 minutes remaining.

Richarlison broke into the box and looked to pull the ball across to a team-mate but instead it flashed towards Leno, who got into a mess and could do nothing to stop the cross catching his leg and rolling into the net.

Arteta responded by introducing Martin Odegaard, Willian and Gabriel Martinelli – the latter coming closest to a stoppage-time equaliser which, unlike against Fulham last weekend, did not come.

While the protests outside the ground focused on the ownership, Arsenal’s domestic season could face similar scrutiny as they fell to a 13th league defeat of the campaign.