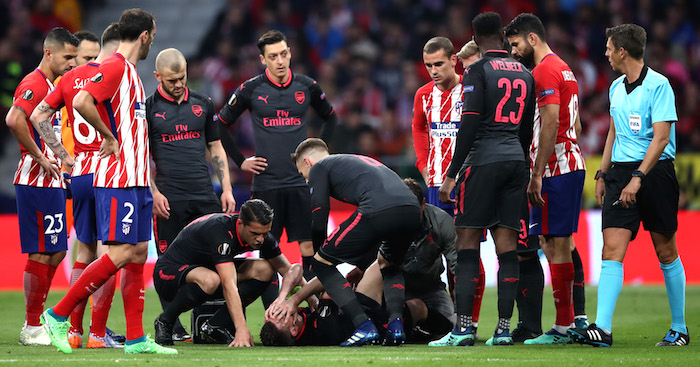 Koscielny was set to be named in France’s squad for this summer’s World Cup in Russia, but suffered an Achilles rupture in the semi-final of the Europa League against Atletico Madrid.

The Frenchman faces at least six months on the sidelines as a result, and admits he instinctively blamed Costa at first.

Atletico striker Costa was in the vicinity when the injury occurred, but had nothing to do with the incident itself.

“When I fell, I thought it was because Costa had tackled me,” Koscielny told the French Football Federation website.

“But not at all. I looked around me and I was all alone. I immediately knew that my tendon had gone. The pain wasn’t normal — I felt a terrible rupture. And I heard a big ‘splash’ — a huge crack. Costa, who wasn’t far from me, heard it too.

“My first reaction was to say: ‘It’s done — my tendon has snapped.’ I was screaming on the pitch. I remember hitting my hand on the ground several times. It was an atrocious pain.

“At that exact moment, I knew that it would be at least six months before I could play again.”