Home All The News Arsenal defender will stay despite transfer rumours, says his agent 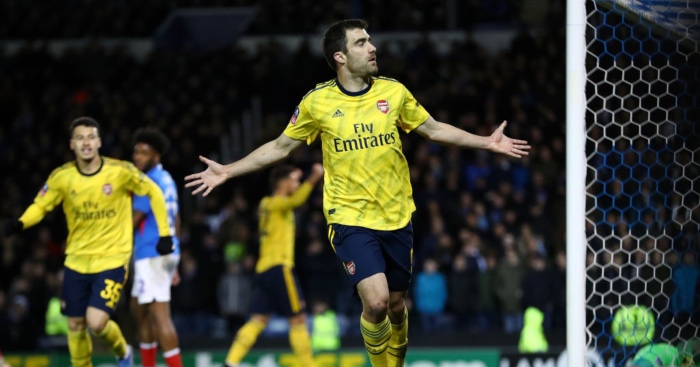 The defender has been a bit-part player under Mikel Arteta this season and has struggled for game time. The Spaniard has preferred the centre-back pairing of David Luiz and Shkodran Mustafi for most of the campaign.

Speaking to reporter Freddie Paxton, Farras said: “He will stay. I don’t see a reason to leave. I don’t know why everyone is writing wrong and fake news.”

However, Arsenal could still be willing to sell the 32-year-old before his contract expires next summer. They’re unlikely to want the player to leave for free or to join a rival club.

Back in March, Sokratis hinted at an Arsenal exit by saying he would not ‘sit on his contract’.

The Greece international could be sold this summer if he’s seen as surplus to requirements by Arteta.

The Gunners have French youngster William Saliba and recent signing Pablo Mari available next season. They will both contest for a first-team place and could push Sokratis down the pecking order at the Emirates if they perform well.

Saliba in particular looks like one to watch. The St Etienne academy graduate has been likened to World Cup winner Raphael Varane in the past and could have a breakthrough Premier League season in 2020/21.

He’s been given the famous number four shirt which was previously worn by legendary captain Patrick Viera.

And he spent last season on loan at former club St Etienne, under previous Southampton and Leicester manager Claude Puel.

Sokratis may be sold to free up funds for Arsenal’s ambitious transfer plans this summer. The North London outfit are currently linked with Barcelona playmaker Philippe Coutinho, as well as a permanent move for midfielder Dani Ceballos.

If Sokratis remains at the Emirates for another season, Arsenal could have some serious competition at centre-back which may finally solve their defensives woes.