Home F365 Says Arsenal do not need a marquee signing; they need this warrior…

And Sokratis is just the man for a battle. "He’s a little obsessed with defending," is the perfect reference... 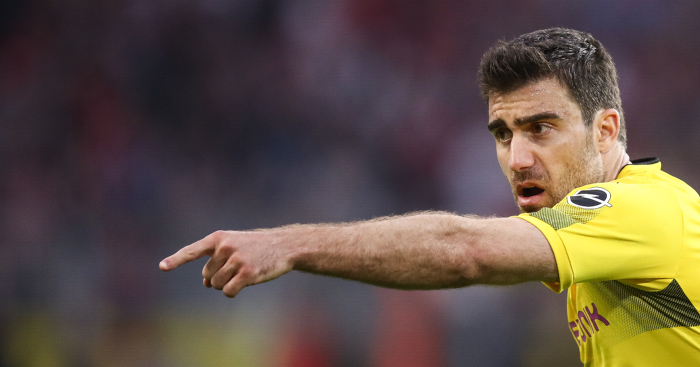 “They liked his attitude, he’s a fighter, he’s a warrior but not too great on the ball. By and large, not the kind of player that gets you excited. Very tidy, very energetic, tough in a tackle, but I’m not sure he’s necessarily going to take the Arsenal defence to the next level.”

We are legally obliged to call Raphael Honigstein a ‘German football expert’ but if he thinks that Arsenal’s defence will not be improved by an energetic fighter and warrior who is tough in the tackle, then he is far from a north London football expert. For he has inadvertently described exactly what the Gunners desperately need.

Is it a sexy signing? Is is a signing to quicken the pulse? Will it excite the YouTube generation with their endless videos of skills, tricks and goals? No, no and no. But is it a relatively cheap signing of a player whose attributes exactly match the significant gap in Arsenal’s squad? Oh yes.

“The defensive work that Sokratis puts in is just unbelievable,” said Mats Hummels, who knows a thing or two about defending. “He’s a little obsessed with defending. He wants to protect the goal-line no matter what and he’s hungry to face duels,” said former Dortmund and current PSG coach Thomas Tuchel. Are you starting to spot a theme? Arsenal are signing a proper defender; not a footballer who can defend, not a ball-playing centre-half, not a converted midfielder, but an actual defender who loves to defend.

It should be exactly the kind of signing that gets Arsenal fans excited.

Since the turn of the year, only Manchester City have scored more Premier League goals than an Arsenal side significantly strengthened by the signings of Pierre-Emerick Aubameyang and Henrikh Mkhitaryan, who arrived five months too early to be truly heralded.

Aubameyang is the goal machine Arsenal have long craved and yet his signing was met with little fanfare as the Gunners’ season already carried the stench of failure. Had he been signed in June as Unai Emery’s first acquisition, fans would be talking excitedly about a new Arsenal era; the Spaniard’s first signing being Stephan Lichtsteiner – with Sokratis to follow – feels a little underwhelming in contrast. But when ten Premier League clubs have conceded fewer goals in 2018 – and two of those clubs have been relegated – it’s clear that head of recruitment Sven Mislintat has his priorities exactly right.

Honigstein went on to say that it was “a little bit underwhelming” that Mislintat has signed a series of players from Dortmund, but Sokratis has long been linked with Arsenal because Arsenal have long needed a player like Sokratis. Should Mislintat have pursued other, less suited players, just to prove that he can register colours other than yellow? Would he have found another player with almost 400 club appearances for less than £20m?

Noses have been turned up at the signing of Lichtsteiner – a serial title winner in a position woefully undermanned at Arsenal – and the potential signings of Sokratis and Marouane Fellaini, but Arsenal are not desperate for goalscorers or creators, they are desperate for leadership, physicality and sheer bloody-mindedness. Early reports suggested that Emery wanted to build around Aaron Ramsey and Aubameyang, but you can insert your own cliche about foundations here.

“He’s a fighter, he’s a warrior…very tidy, very energetic, tough in a tackle.”