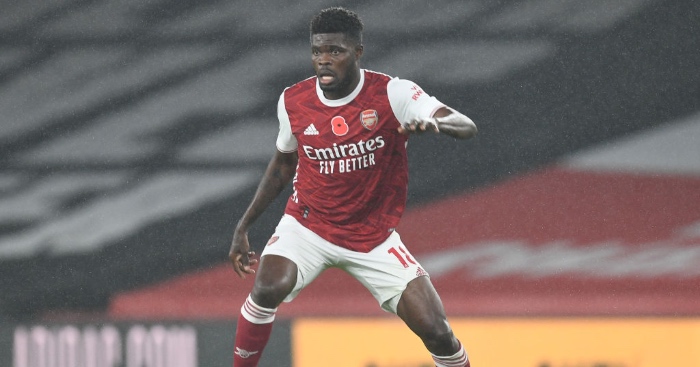 Arsenal boss Mikel Arteta is currently waiting to find out the extent of the injury to Thomas Partey, after the player was subbed off against Aston Villa.

Partey was brought off at half time due to an apparent thigh injury.

The Ghanaian international was out of sorts during the first half and struggled to cope with the opposing midfielders.

MAILBOX: De Bruyne is overrated and Arteta is a smoother Big Sam…

Speaking about the potential injury, Arteta told reporters: “We don’t know [the extent] of it. We have to scan him tomorrow or the day after and see what he felt straight away.

“Let’s wait and see what the magnitude of the injury is. As I said, the doctor will have to have a look at him and probably scan him. Then we will decide what to do with him.”

When asked whether the midfielder would go away with Ghana during the international break, Arteta simply said ‘I don’t know’.

It looks like club officials and fans alike will have a nervous wait to discover the extent of Partey’s injury.

The 27-year-old has been one of the club’s better players so far this campaign. He joined from Atletico Madrid for £45 million after months of speculation surrounding his future.

If he misses the international fixtures with his country, that would give Partey around two weeks to recover.

Arsenal’s next match is away against Leeds United on Sunday 22nd November.

They will need to be a lot better if they are to gain any points. Club legend Ian Wright was rightfully critical of the players after their loss to Aston Villa.

He said: “It’s as bad a performance as I’ve seen from an Arsenal side. When you consider only two of them were playing in midweek.

“It was poor in every department. They need to break the lines, they need space to hit the ball into, they were dithering on the ball.

“They were streets ahead of us today.”