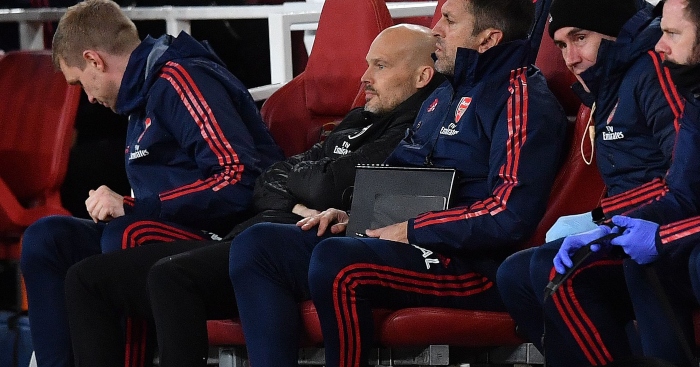 Arsenal are worried that Freddie Ljungberg won’t buy them enough time to bring in the right managerial appointment, according to reports.

Neal Maupay’s header condemned interim head coach Ljungberg to a 2-1 defeat against Brighton in his first home game in charge on Thursday.

That came hot on the heels of a 2-2 draw on the road at Norwich City last weekend with the former Sweden midfielder failing to improve the Gunners’ fortunes.

A report on Tuesday claimed that three managers have risen to the top of Arsenal‘s shortlist to replace Unai Emery with the club’s ‘initial focus is on candidates who are immediately available.’

Former Juventus boss Allegri and ex-Tottenham manager Mauricio Pochettino are available, while The Athletic adds that it believes Manchester City assistant Mike Arteta ‘would fall into the same category’.

However, the Daily Mirror says that the Arsenal board are ‘panicking’ after Ljungberg‘s disappointing start in the dugout.

The club had hoped Ljungberg would buy them some time as they search for Emery’s permanent successor but ‘there are already fears’ over his start and lack of experience.

The report adds that Arsenal ‘may have to bring in a manager quickly rather than wait for the right man in the summer’.

Arsenal are struggling ‘to make a decision’ on a new manager with Brendan Rodgers – who was reportedly their first choice – committing his future to Leicester.

The Gunners hierarchy ‘are now feeling the pressure’ as they have failed to identify a ‘clear path forward’.