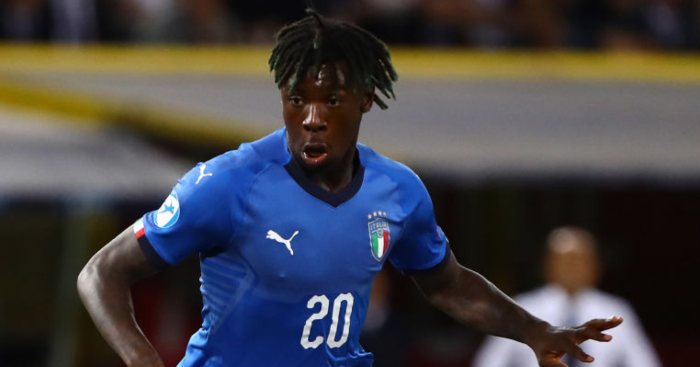 Arsenal have made a bid for Juventus striker Moise Kean but it was ‘swiftly rejected’ by the Italian outfit, according to reports.

Juventus are looking to sell Kean and, according to Gianluca Di Marzio on Saturday, the Gunners and the Toffees are going head to head once more. Apparently, Juve are willing to let the teenager go on the condition they get first refusal at the next point of sale.

Di Marzio added that Kean will cost around £27m, but Barcelona are also said to be sniffing. They have a plan which involves purchasing the striker before sending him immediately to Sevilla on loan.

And Tuttosport (via Sport Witness) claim that Arsenal have had a €35m (£31.5m) bid, without a buy-back clause, rejected for Kean.

The Italian outlet seems to think that it is the failure to include a repurchase option that remains the sticking point in any negotiations over Kean.

Juventus want to sort Kean’s future out first with a new contract as soon as possible before trying to sell him with a buyback clause or settle for a ‘dry loan’.

The Gunners’ fellow Premier League side Everton have ‘remained vigilant’ on Kean, while Dortmund are doing a ‘survey,’ which we presume means keeping tabs on the 19-year-old.

The Serie A side are now ‘seriously thinking about sacrificing the young bomber’ but want to cover themselves at the same time.