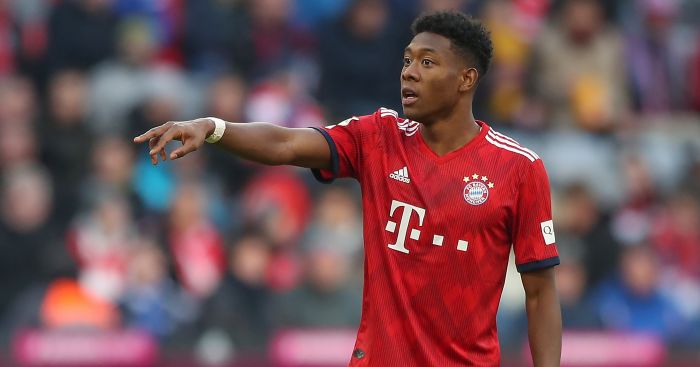 Bayern Munich defender David Alaba admits he “can imagine trying something else” but is “happy” in Germany.

The 26-year-old has been at the Bundesliga side for 11 years since he made the move from Austria Vienna in 2008.

In his time in Munich he has amassed over 300 appearances for the club and won seven Bundesliga titles, three German Cups, two German Super Cups, a Champions League, a UEFA Super Cup and a Club World Cup.

And despite being content at Bayern, a new challenge could be just around the corner for the Austria international.

In an interview with Bild, Alaba said: “I can imagine trying something else, but I really feel very comfortable at Bayern.

“Every year there are new challenges and new objectives, and the pressure will always be there.

“I’m happy in Munich, but of course I can imagine seeing something else [in the future].”

When asked which countries he might consider, Alaba added: “Spain, England.

“In Spain it would be the two big clubs, I guess? Real [Madrid] or Barcelona.

“Also the big clubs [in England].”

During the interview Alaba also reconfirmed that he is still a big Arsenal and will be for his “whole life”.

“Yes I was [an Arsenal fan as a child], Alaba continued.

“When you’ve been [an] Arsenal fan as a kid you will be one your whole life in some way.”