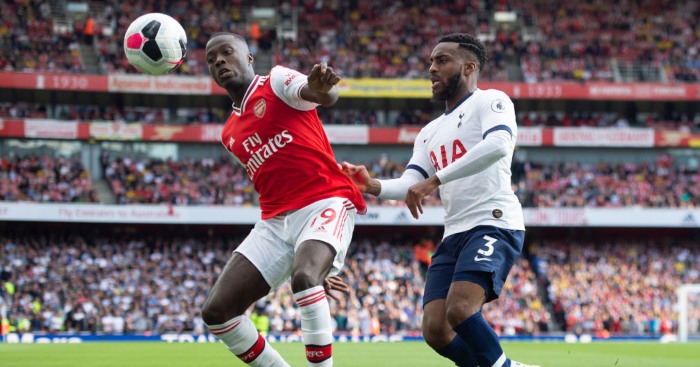 Let’s have your emails: theeditor@football365.com…

And yet I’d maintain Arsenal fans are happier with their lot. I’m looking forward to going to the Emirates to see Arteta’s red and white army take on Sheffield Utd this weekend.

He must have invoked his inner David Byrne on Talking Heads ‘Once In A Lifetime.’

Speaking as a lifelong Tottenham supporter I would not blame him for wanting out as he contemplated wanting to win a trophy in his career.

Messrs Levy and Lewis won’t be able to provide that for him.
David Harris, Sydney

Gary Player once said “ its amazing the harder I practice the luckier I get.”
He is also recognized as just about the fittest 84 year old on the planet , the most travelled sportsmen ever and a pioneer as regards diet and its effect on the body.

I am sure some readers have seen the excellent Soccerbox series with Gary Neville, his latest episode with Steven Gerrard was enlightening in a number of ways but particularly his comments as regards the culture change at MU whereby they or Sir Alex stopped the drinking culture first and therefore Neville felt they were fitter than other sides and therefore would win the majority of games particularly the longer they went on.

Football now is a 100 minute game not 90 and it was interesting to note some Spurs fans and Mourinho himself bemoaning the fitness of their team. So assuming Gary player is correct in terms of more practice , better rest , better diet etc how does this fit in with Spurs not being as fit as they should be. Well their captain certainly likes a night out too many that resulted in a drink drive ban , and the tabloids are very fond of showing Dele Alli propping up bars at hotels late at night , so is there a lack of discipline of the pitch which is effecting performances on it ?

Liverpool had their own drinking culture culminating in the “spice boy” era whereby players were known as much for their antics off the pitch as on it , but recently that culture has changed. It’s well known that Milner has never touched a drop of the hard stuff and Robertson came out this week and said he doesn’t drink during the season , if you add in the fact that Salah and Mane don’t touch the stuff for religious reasons then perhaps we can all see a pattern emerging.

The two greatest players of our time , Messi and Ronaldo are never pictured in night clubs at 4 am in the morning , in fact it is well known how much effort Ronaldo puts into his own physical well being as regards rest and recuperation.

If you really want to get better at something and improve your performance , you shouldn’t be doing anything that gets in the way of spending time on the practice field or not quite being 100 pct when on it.

That extra practice seems to result in extra luck , which seems the right way round to me.
DL, ( love you really Matt Stead) Geneva

Johnny Nic’s piece
I really enjoyed reading Paul McDevitt’s response to Johnny Nic’s well written piece. However, there was one thing while reading that jumped out at me that my hubris has deemed interesting* enough to explore. When discussing the three sources you found mentioning ‘old school’, you wrote, “one was a female writer I hadn’t heard of saying he was ‘old school with new ideas’, a Daily Mail article extolling why he was not ‘old school’ and then one in the Times where Chris Wilder himself refers to himself as ‘old school’ because his team chases the game and no one calls out Jurgen Klopp for doing the same.” My interest piqued at the use of the word “female”.

Now, before I continue, this isn’t an email to call you sexist or anything like that, but in an article and response which were essentially about the importance of communication, language, and presentation, I found it interesting. What was the function of it in the sentance? Was it simply just to add extra information for the reader about the author? Yet, if so, where was that information for the Daily Mail author? Was it to highlight an extra reason as to why you might not of heard of said writer was that she was female in a male dominated sport? Was it to highlight that out of the whole search, only one person – and a female at that – said he was even remotely old school? Or even just to highlight that it was a ‘minority’ writer within the sport of professional football?

I wouldn’t be surpirsed if I was the only one to give it a second thought, let alone even picked up on it, and I don’t really have any grand point to make. I was hesitant to write this, because I assumed any rebuttel would centre around snowflakes and libtardedness, or whatever you’re having yourself. But when the conversation was revolving around communication, and the use of language, my mind made the word jump out, and I became curious about it’s place within the context of the piece. As yourself and Johnny Nic have said, communication and understanding are important so my mind raced and wondered why there was the need for the use of the adjective “female”, hence the numerous questions!
Néill, (*maybe have been used fast and loose), Ireland

Short one on the link between ‘old school’ and the value of effort. The way I see it, ‘old school’ managers put graft above everything else. They believe that if only their team run more and put more effort in, the most basic tactics and player skills will be enough. Then you have the naïve pretty-passing types, who, maybe raised on a diet of Championship Manager, believe that if only you have the right players and tactics you’ll win every game.

Then you have the really smart coaches, like Wilder, who knows that all his great tactics and coaching count for nothing if the team doesn’t leave every drop of sweat on the field. When Wilder complimented Liverpool on their graft, he was acknowledging that Klopp’s coaching isn’t all about gegenpressing and tactical planning, there’s a lot of hard work needed to execute the plan. Other top coaches (Pochettino, Conte…) frequently mention that their teams require a lot of effort to get results, and it shows in their teams’ games. Incidentally a (possibly apocryphal) story about Guardiola’s first day in charge at Barca, where Xavi, expecting some pearls of insight, asked “So what do you want us to do”. Guardiola’s answer was simply “Correr!” (Run!).
James, Switzerland

Steady on…
I think Matt Stead’s article somewhat sanctimoniously misses the point of the criticism of this weeks 16 Conclusions! No remotely sane Liverpool fan (stop laughing in the back, there are some of us here!) believes Liverpool or Klopp should never be criticised, or that the club is so wonderful that any criticism is unfair/biased/etc. However, if you read the 16 Conclusions, you would…conclude that Liverpool had been very lucky to escape with a draw, and that at no point had Liverpool played well in the game. The gist of the article seemed to be that as soon as Spurs stopped being scared, they started out-playing Liverpool, and Liverpool were lucky Spurs realised it too late and missed their easy chances, while Liverpool, having failed to capitalise on their chances, were complete shite.

But as we all know, football is rarely so simple. Liverpool could have been 3-0 up at HT, what then? Why no acknowledgment that for most of the match, Liverpool were clearly superior? Yes, Spurs could easily have grabbed a draw, or even a win, but it could have just as easily been a 3-0 beat-down at HT. Away, at a tough team (regardless of injuries or form, they’re a very talented team), and a team managed by Mourinho himself!

(For the record, I thought Spurs were very dangerous on the counter, and while I missed the last 20 minutes, I was very relieved to see that we’d held on for the 1-0 win!)
Henry, LFC, Köln

What on earth made Matt Stead put Nicolas Cage in the same bracket as Michelangelo and the Beatles?
Mick, Stockholm

All the replies…
Dear Football365,

*Paul McDevitt’s mail about being old school suggests Roy Hodgson taught his defence to work in unison by having them run holding on to a rope. I thought that was George Graham, whose success with the Arsenal was built on his efficient back four.

*Mark, Waterdown LFC asked why Spurs fans aren’t angry about the Liverpool result. Perhaps because it’s football and losing 1-0 to the team that are cantering to the league title isn’t necessarily a bad result. If you’re the sort of person who gets angry because their team loses a game, irrespective of the context, try some mindfulness exercises, because it’s really not worth it.

*If the officials get a decision incorrect and end up awarding a throw in to the wrong team, or give a corner instead of a goal kick, you as the defending team still have an opportunity to get set up and defend it. Yet so many teams seem to concede after such an incident and straight after the match the manager is on television complaining against the decision. It’s almost as though they would prefer to martyr themselves in protest at the injustice instead of just getting on with the game.

*Question for Joel, writing in about Nigel Pearson? Who are Notts Forest?
Ed Quoththeraven