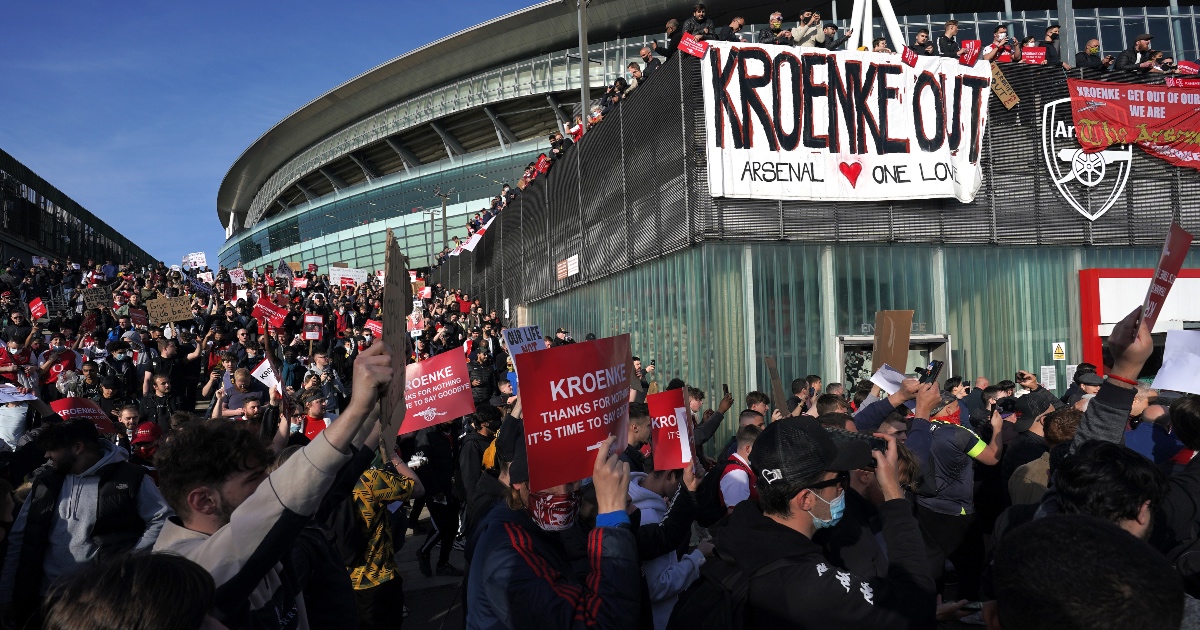 Thousands of Arsenal supporters marched on the Emirates Stadium ahead of the Premier League fixture against Everton to protest against the club’s owners.

The relationship between fans and owner Stan Kroenke, which has been tumultuous in recent years, was worsened further still when the Gunners announced on Sunday they had signed up as one of the founding members of a breakaway European Super League.

But the original decision only exacerbated the call from supporters for Kroenke to sell, and they amassed outside the Emirates to call for change.

An effigy of Kroenke hung from a lamp post as supporters let off flares and held up anti-Kroenke banners, chanting for his removal and also singing songs which would usually be heard in the stands.

One protester had to be taken away on a stretcher after falling from a roof over the box office and cutting his face but there appeared to be no other causalities as a strong police presence kept fans calm – even if they could not prevent the hordes failing to adhere to social distance measures.

Some supporters were overhead planning to block the team buses arriving but the PA news agency understands the Arsenal players arrived earlier than normal, with the Everton squad arriving via a bridge on the opposite side of the stadium.

The protests continued as the teams were announced inside the ground, with manager Mikel Arteta insisting on the eve of the game he would prevent his players being distracted by an historic week.

On Wednesday, Arsenal Supporters’ Trust board member Akhil Vyas said: “Kroenke’s been such an absent owner that he will probably just hide like an absolute coward like he has been doing all week, hoping that it just blows over.

“There’s a lot of noise on social media protests and around London but I’m not sure how much Stan Kroenke cares or will see of it.

“They’ll be hoping it just goes away, but I’m hoping it doesn’t and it can really be used as a catalyst for change.”