Home Arsenal Are Arsenal fans starting to trust the process? 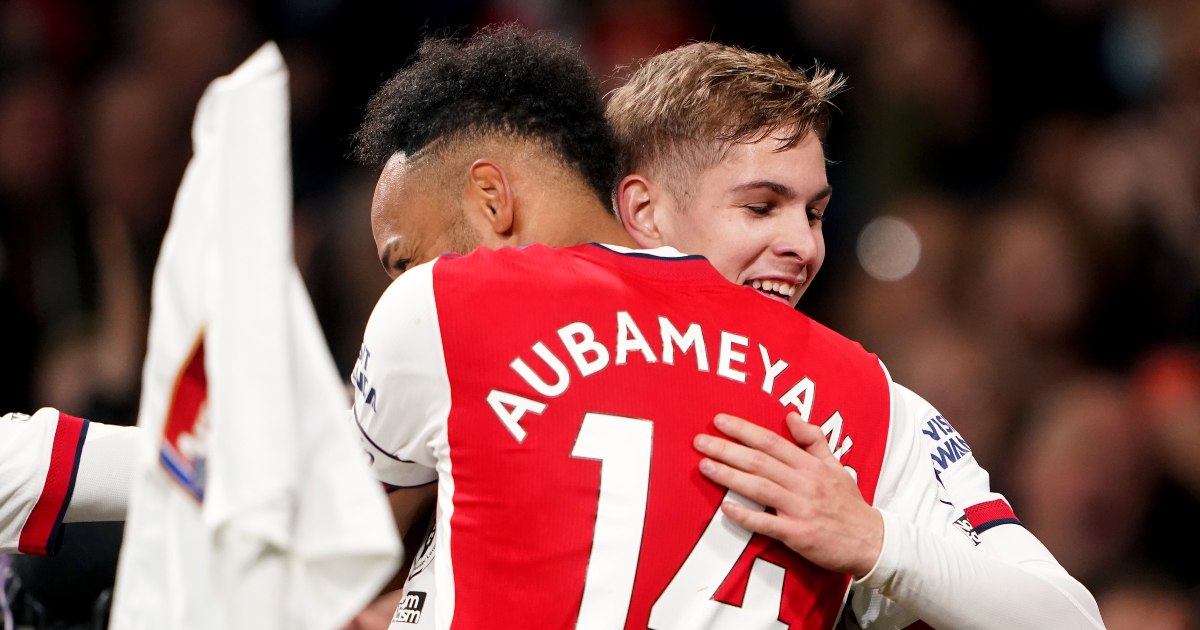 Arsenal beat Aston Villa on Friday night so we have mails from Gunners fans. We also have thoughts on Manchester United and Newcastle United of course. Mail us at theeditor@football365.com

Trusting the process
We were told often last year, “Arsenal fans need to trust the process,” so often in fact that it became a stick to beat us with every time one of the inevitable muck-ups would happen anywhere in the game, when Mari would get bullied, when Luiz would do whatever it was Luiz did, when Xhaka would lose his rag or spray passes awry, every time a back pass to Leno or a short pass from him put us in danger or cost us a goal, (as Emi was proving himself “one of the top keepers in the Prem” at Villa.) As an Arsenal it became expected even on my part, and personally I got pretty sick of being told to trust a process that led to successive 8th place finishes and one FA Cup, (I mean it was Roberto Di Matteo who won the Champions League for Chelsea first, a decent cup run when you join halfway through the season at a supposed “top” club is apparently not *that* hard!)

We were berated for spending so much on White and Ramsdale, especially Ramsdale as he had been relegated twice in two seasons, despite the fact he was voted player of the year by both clubs fans (and preceded that with winning AFC Wimbledon’s POTY the previous season on loan.) But the fact that Ben White “didn’t have the sufficient experience for a top club” had also been crucial in overlooking the fact he had been so wanted by Bielsa at Leeds after playing almost every minute on loan there for their promotion season. Imagine the plaudits he would have got if he performed as well in a freshly promoted team. Like Phillips, he may have even forced his way into first team England reckoning by the time the Euros rolled around, rather than only being an unused substitute. I feel like on current standings both White and Ramsdale could potentially go on to be at least first teamers, if not stars for the next 3-5 years, hopefully at least helping us back into the Champions League and starting to be an attractive proposition again for improvements and reinforcements.

Nobody knew anything about Tavarez or Sambi and they were expected to contribute very little in their first season in the Prem, but both have now played enough minutes for me to say they look like at the very least decent squad options going forwards, and while they could potentially end up like say Armand Traore and Denilson, they could also end up like Clichy and maybe an Edu or a Gilberto Silva, which few people could argue with, especially for the relatively low transfer fees paid for each.

Tomiyasu was something of an enigma before we signed him as he went from a young, talented, versatile defender who had proven himself in Serie A and was now looking to go to a higher level in one of the top Prem teams, to a player who couldn’t really play centre back or right back and therefore was getting shipped out and would inevitably fail, in the space of about two weeks, or roughly as long as it takes for Tottenham not to sign him and us to make our move. Again I think he’s been impressive, both in commitment and talent, for the price we paid for him, I believe less than 20 million quid. If we get three to five years service out of him and back into the CL in that time it has to be a bargain.

Our seven and our ten are academy products who care about the club and are unarguably two of our biggest threats going forward, and could potentially both be England starters for years to come, (wherever their club careers take them!)

Partey, Gabriel, Aubamayang and Lacazette were our other starters today, I don’t think any of them are real slouches when it comes to top level football. We beat Villa 3-1 today, you may say big whoop, but in the previous three games against them we lost all three with no goals scored.

It does start to look like signs of some clear improvement at the Emirates, recruiting with a plan, looking to improve players rather than just buy the finished world class product (who, lets be perfectly honest, have had zero interest in playing for Arsenal since Henry left.)

I get why other fans love to have a pop, for most of my life I was the same with delusional Scouse fans who every year thought that “this is our year,” and while I havent exactly see many Arsenal fans that optimistic for a while, it seems to me like the clouds have lifted and there is finally a light at the end of the post 2010-14(ish?) tunnel.

Which is all just a very longwinded way of saying I think I’m starting to get onboard with this iteration of Arsenal, the first three weeks of this season currently feel a long time ago and for the first time in what feels like an age, I’m starting to look back up the table at the teams we might catch, rather down to the teams that could catch us. Champions League is obviously a challenge, probably made harder in the mid term at least because of Newcastle’s obvious “potential.”

You could say I’m starting to trust the process.
Andy, Guatemala

Half-time thoughts
This game has definitely been more Spurs at home than Palace at home. Arsenal are not the kind of strong, imposing side at the moment that they can sit on a 1 0 lead and hold out. Yes, they did that against Burnley and Norwich earlier this season but they were literally the bottom 2 at the time and are currently in relegation positions. This Arsenal side cannot sit on a 1 goal lead and Arteta has to tell them to keep going for another goal. I hope they start the second half going for 3 0 rather than sitting on it.

Villa have been uncharacteristically poor. They are a good side, they comfortably did the double over Arsenal last season and have quality players, but not a single goal attempt in the first 45 (51) minutes? Ramsdale only touched the ball with his hands once, coming out to easily catch a cross.

There should not be any controversy about the penalty. Targett has his toe touch the ball but his leg goes through Lacazette’s leg beforehand. Clear penalty, if that was Man Utd it wouldn’t have even gone to VAR.

McGinn is a dirty, thuggish player. I thought the same after watching Croatia whip Scotland at the Euros in June, here he stamps on Partey’s foot but then only gets a yellow when he clips Sambi, should’ve been off.

Martinez shows his quality with that save from Saka, who should’ve score, and the penalty save. Not sure why the Arsenal fans are booing him, I think that only started when he was desperately appealing to the ref to get Auba carded after he charged down his clearance.

Hopefully the goal settles Partey a bit, he scored some belters for Ghana and Atletico Madrid so hopefully he gets a bit more consistent now when selecting to shoot. Seems like Nuno and Sambi need that too, they’ve had some woeful shots this season.

Bit of a longer mail here! Hopefully you get a few more to get a mailbox in before the Saturday game mails start to roll in. Bring on the second half!
Andrew M, (there’s a few of us Andrew M’s writing in lately) AFC, Australia

Arsenal early winners?
Clean sheet against the pantomime Villains with the strongest member of the defence pulled out. Strong performances with the centre back pairing again. Solid looking goalkeeper. And some well missed attacking verve from midfield.

Early winners practically writes itself tomorrow – oops they just scored.
Olawale AFC (and that’s just the defensive half of the team), Abuja, Nigeria

Poor from Smith
Dean Smith’s odds on losing his job must be dropping fast.

Making Arsenal look like World beaters, a week after capitulation at home v Wolves and after spending so much.

A salient point
Every article and letter you publish about Ole needs to contain a statement that he has effectively exactly the same amount of managerial/head coaching experience as Brendan Rogers.
Andrew J. Morris

What would be good for Man United?
Much has been made of United’s coming schedule, almost all assuming disaster. What happens if they do well? What would be doing well?

For me 9 points from 18 would be good. The others have to play each other also.
Liam

Why the Newcastle negativity?
There are two angles to this negative attitude towards the takeover – one is business regulations and the other is the so called human rights angle.

Business regulations first: if u don’t want states to directly or by proxy own football clubs then fine, be consistent and throw out the owners of Chelsea and man city, boycott PSG, and while you’re at it cancel all the bein broadcasting agreements which have control over all football coverage across about one fifth of the globe and are owned by the same state that is staging the next World Cup. And if we can’t do that then leave Newcastle be – don’t apply one rule for Newcastle and one rule for everyone else. I thought the concept of marketing the best league in the world meant that there are many strong teams that are competitive. Or is it ok for the big boys to have a cheat code, but if one of the little boys cracks the cheat code then we cry foul?

Human rights next – by all means have an opinion , but remember that there are two sides to every story, and just because one side is mostly quiet it doesn’t mean the side doing the talking is right. remember that what we don’t know is always much more than what we do know,

Allow me to share two bits of advice: don’t take your info from Wikipedia, and don’t believe most of what comes from the same intelligence agency that sent a million US and UK soldiers to kill millions of people by mistake (oopsie) . We have so much that is wrong with our own “western civilized” governments, don’t let them divert attention from their dismal human rights records (how many tens of millions have our wars killed) by shifting the focus to governments of nations that started the” modern civilization” journey 100 years after we did.

Stick to the football guys. We all know it makes perfect sense but some of us are just denying it. True it’s mostly about football and money , but Maybe it doesn’t sit well with us that our own government and local councils have ruined some of our cities by poor decision making, and now organizations from countries who we perceive as inferior to us are coming in to develop communities and create jobs (just look at Manchester as an example).
WNM (can’t wait to see who the next new Alan Shearer will be)