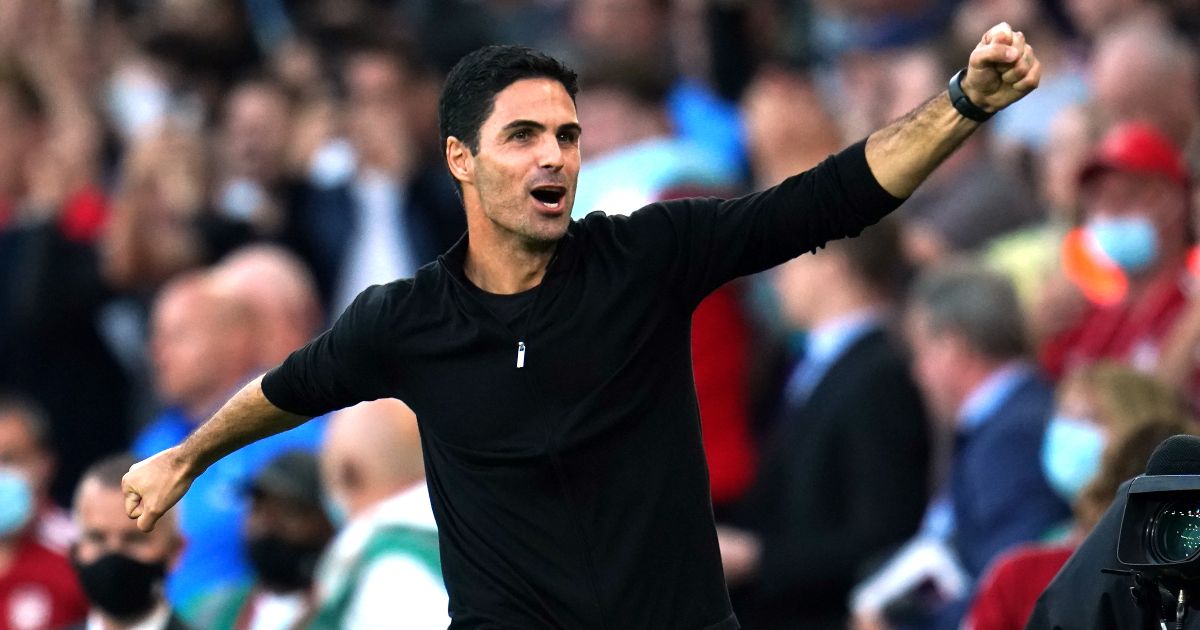 Are things starting to come together for Mikel Arteta at Arsenal? Get your mails in on any topic to theeditor@football365.com…

Some early season revisionism
Given the improvement for Arsenal before and after the international break, which has been very promising, I wonder if the early season form should be reviewed again to some extent?

It was stated in the mailbox at some point that Arsenal were not expected to beat Chelsea (home) or Man City (away) and so only the Brentford result was a poor one. I don’t think that the club should be positioning itself to not even challenge in those Chelsea/City games but in this protracted “transition” I think that it is more realistic that at best we get the odd win or draw and just try to keep it tight (which they admittedly failed to do). I definitely don’t think two losses constitute any huge surprise. Maybe in the next few years they can develop towards routinely pushing these two or maybe it will all go to shit again – time will tell.

The Brentford result was poor but looking back there were a number of contributing factors towards that. Firstly, as they demonstrated against Liverpool this weekend Brentford are actually really good. Secondly, there was a lot of motivation for Brentford that night against a very beatable “big 6” team at home in their first game with a crowd in 18 months, in their first game in the top flight for however long. Finally, the Arsenal team on the night then was completely different owing to covid in the squad which was compounded by a lack of depth as the summer signings were not yet made; there were only 4  of the same players as in the spurs game – 2 of the now settled back 5 (Tierney and White on debut), Xhaka & Smith-Rowe.

Before yesterday’s game I thought that both spurs and arsenal had been similarly unlucky with players being out (spurs with this international travel thing). So I was massively surprised how big the gap was between the teams on the day.

One final bit of revisionism to be made which I am sure is true for all teams but seems to be exacerbated for Arsenal for some reason. There is a massive difference between the Arsenal fans who go to games or watch on TV but don’t really comment so much publicly and the Arsenal twitter and AFTV types who need to be sensational to be relevant. I think the first group are pretty much on board with this young squad and there is a lot of good will and positivity even when were are getting spanked by City or whoever. I think that within this group there has been a genuine reassessment of the level we are at (5th would constitute a really good season). I note the hypocrisy of writing this online but I think the mailbox and F365 is supposed to be slightly more considered except on the endless OLE IN/OUT emails which I am sure everyone skips anyway.

Starting to ‘trust the process’
Yes we’ve only beaten Burnley, Norwich and Tottenham. And yes this post may seem laughable in a few months. But my gosh what a difference three weeks makes!

Every AFC fan will rightfully discuss the virtues of Smith-Rowe, Saka, Odegaard, PEA and Partey, but this glorious victory was built on the strong foundation that is being created at the back. Only Tierney has survived the 5-0 humbling at the hands of Man City. We’ve replaced Leno, Kolosinac, Chambers, Cedric and Holding with Ramsdale, White, Gabriel and Tomi, and what a transformation it has been. This is the best defence we’ve had in years. Yes they’ve only played together for three games, but they are already an intimidating group. I’ve yet to see Tomi lose a header or be dribbled past. Gabriel is back to his best, and honestly he should be playing for one of the top top teams. We are lucky to have him. The best part part was seeing Ramsdale blow his top, not because of conceding a goal but because he was forced to make a save. That is leadership we have not had for a long time.

Arsenal fans are a fickle bunch at the best of times, but I genuinely believe we have reasons to excited for the future!
Ash (London)

I always love watching people enthuse about this tie as it’s the only one we really care about.

Chelsea fans may think their games against us or Spurs matter but they really don’t – it’s patently evident to anyone that’s actually attended the NLD.

My first was in the pouring rain as the greatest player I’ve ever seen represent the club and Mr Arsenal himself added two late goals to take the three points in a 3-1 win.

Yesterday was up there with that one – a cracking atmosphere with the stadium rocking so much you sometimes felt it might just get up and walk down the Seven Sister Road like those trees in the Lord of The Rings trilogy.

It was also nice that Jimmy Greaves was remembered before kick off – England’s greatest striker but for me, the man, who along with Ian St John, really cemented my love of the beautiful game to the tune of the 1986 World Cup theme – still the best one ever in my view.

And to my North London brethren up the road – you lost this one but you’ll probably win the next one, just give Nuno time. He’s a decent manager and he will come good.
Graham Simons, Gooner, Norf London

Arsenal plan is clearer…
It is amazing what a few weeks does in football eh?  3 games ago Spurs were top and Arsenal were bottom, now Arsenal are above Spurs.  Of course, if you looked deeper than just the table and the results you would see there were mitigating circumstances for both positions.  Spurs were fortunate to win their 3 opening games 1-0, watching the games and looking at the stats showed Wolves in particular were very unlucky.  Arsenal meanwhile played 2 of the title challengers with a team decimated by covid, injuries and new signings not even been signed yet.It takes more than a thumping home win against Spurs to say Arsenal have turned a corner but resident sourpuss Souness needs to give at least a modicum of credit to Arsenal.  In his and many pundits eyes it is fair game to hammer Arsenal when we lose but also give no credit when we win because ‘you have to do it more often’.  By that logic 17 out of 20 teams in the league would never receive any credit.

These lazy pundits needs to give broader context, yes we know Arsenal aren’t going to get top 4 and yes we know we had a terrible start to the season – but a pundit needs to look at the recruitment and look at the style of play on the pitch and decide if there are brighter times ahead.  It is too easy to just dismiss Arsenal as not capable of challenging the top 4, we all kind of know that.

Arsenal finished yesterday’s game and the one before with all 6 summer signings on the pitch, that must be pretty rare for any team.  Arsenal still are in a huge rebuild but they are doing it the right way.  They have the youngest starting 11 in the league currently with only Aubameyang, Partey and Xhaka over the age of 23.  The balance of the team is so much better even when we take in to account the lopsided formation when in possession.  Tierney pushes high, Tomiyasu stays back but this is compensated by Xhaka filling in deep on the left and Odegaard drifting right to ensure the right winger isn’t isolated.  We have two front foot ball playing centre backs and attackers capable of dropping in those half spaces and causing teams problems.  This isn’t to say all Arsenal’s problems are solved but it is saying that it is clear to see what the plan is on and off the pitch, which is in currently sharp contrast to Spurs
Rich, AFC

Rest assured, Tottenham didn’t concede the fastest 3-0 deficit in the league, just in the north London derby. I am sure there are countless examples of faster leads being formed, but the one that instantly springs to mind was inflicted by Liverpool on the other north London comedy club. In 2014 (the first of the 2 recent 5-1 humblings), Liverpool were 4-0 up in 20 minutes. Ouch.
Dom Littleford

As a Liverpool fan, I have a lot of restecp for the city team that beat us by a point in 2019. The balls of that team as front runners was incredible. It doesn’t matter how much you spend, they earned that league. We saw that team against Chelsea. City are still dangerous. Chelsea either played for a draw or played for a rope a dope. They’ve now played 2 of 6 top four head to heads and have 1 point. OK, played a half with 10 men and did play for a draw. They’ll have to beat united if this #t4h2h theory holds weight. I doubt he’ll play the 3 holding midfielders against McFred.

Liverpool, dropping points against Brentford. Probably not a lot to draw from that. Maybe it’s a concentration thing, maybe playing newly promoted teams at home in the first quarter of the season is harder than playing them in the last quarter when they’ve had all their enthusiasm kicked out of them. But Liverpool are top of the league, are unbeaten, and have only conceded in two games. Salah, who didn’t even qualify for F365s best strikers listicle now has the fastest premier league ton of any Liverpool player. Faster than these strikers: Owen, Fowler, Torres, Suarez, Kuyt. Next weekend against City could well see the last time that the top of the league changes place subject to games in hand.

Man United. Back to spending money. Not sure what to do with it but they’ve spent it. It makes their bench look really nice. They don’t play a Top 4 side until Liverpool on the 24th October and by then they may be focusing their efforts on the Europa league. If they aren’t top by the end of that game week, they may never be top. The most interesting thing about their season will be the Ole oke koke.

Or none of this will happen. Football eh?
Alex, South London

Let’s all calm down…
…we live in an instant world these days. Everything on demand the minute you want it and when you dont get it, then hell hath no fury etc etc. Lets be realisitc, at this stage its pretty hard to know how good or bad some of these results even are. United drawing at southampton looked an absolute stinker, then Soton go and draw AT city. Liverpool drawing at Brentford in theory doesnt look great but could be a decent point. Three weeks ago Arteta had broken Arsenal and large majority of fans had him banished never to work again. Get a grip people, the first few weeks are more about performance and team shape, if you have something there, results follow. And to my eyes it looks like CIty chelsea and Liverpool look strong, United in fits and bursts, Arsenal clearly building something with a young squad, Spurs all over the place and West Ham again could be the best of the rest. But its SIX games, enough of the sensationalism that the tik tok generation thrives on.
Barry Shuttlecock