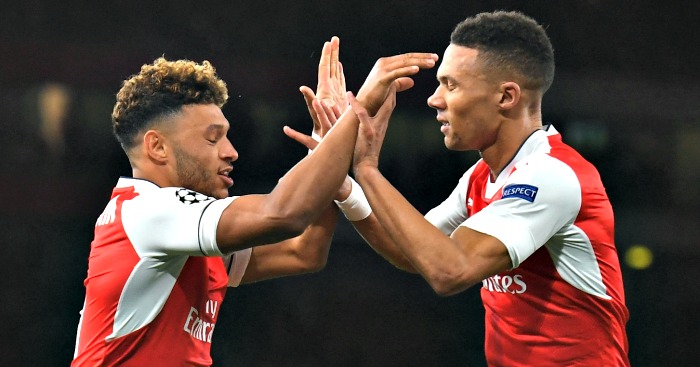 And let me tell you, this was a lot easier than the ‘build around’ list…

Petr Cech
Thirty-five is not an age when every goalkeeper should be considering retirement, as the renaissance of Gianluigi Buffon demonstrates. Yet in order to avoid the difficult questions, an ageing goalkeeper’s performances must at least remain consistent – and probably improve – for his age to not become a factor.

Unfortunately, that is where Cech falls down (and parries the ball out to the striker). His form at Arsenal has never matched his performances at Chelsea, and reached a nadir last season when a more reliable reserve goalkeeper than David Ospina might have been given more chances to stake his claim as No. 1.

Arsene Wenger has plenty on his plate this summer to improve Arsenal’s squad, but going into next season with Cech again as No. 1 would be a gamble on his goalkeeper’s form not declining even further. A bid for Jack Butland, perhaps?

Yet there he still is: In an Arsenal XI based on Premier League minutes last season, Coquelin starts in central midfield. Having proved very useful for half a season in 2014/15, the Frenchman has since benefited from Wenger’s extreme generosity and long memory.

Coquelin is now 26, and a running joke between his own supporters. How long will it take him to get booked? How long after his 78th-minute introduction will Arsenal get caught high up the pitch and left vulnerable to the counter atta… oh, it’s happened before I’d even finished the question…

Lucas Perez
The signing of Perez always smacked of Wenger saying “you want a striker? Well here’s a striker”, unable to land his top targets and so making do on August 30. At £17m, the Spaniard was hardly a budget option (at the time he was Arsenal’s fourth most expensive signing ever) but he at least had the finishing and creative ability to fit the bill.

The problem is that Perez turned 28 the week after joining, and was barely given a chance to play. The striker knew he was unlikely to be first choice, but would have expected far more than 265 Premier League minutes spread across 11 appearances. The rise of Alexis Sanchez as a central striker did for him.

It now seems unthinkable that Perez will stay at Arsenal beyond this summer, and you can see why he might be a little p*ssed off with Wenger. He has essentially been played by his manager, cast as Wenger’s stooge and temporary deflector of criticism.

Alex Oxlade-Chamberlain
The most controversial entrant on this list by far, but the logic is obvious. If you can get £25m for a player who you don’t particularly want – and the lack of contract offer insinuates that – with 12 months remaining on his contract, you take it. Arsenal have a history at being awful at getting good money for fringe players, but now Wenger has the chance to address that issue.

Should Liverpool be prepared to pay £25m for Oxlade-Chamberlain, Arsenal must see it not as a loss to a Premier League rival but an opportunity to upgrade. It means signing Thomas Lemar even for £40m looks like good business as a replacement in attacking midfield. The alternative is that The Ox signs a new four-year deal worth over £100,000 a week and Wenger is persuaded that he doesn’t need to look for an upgrade. That’s going to happen, isn’t it?

Kieran Gibbs
“We cannot make a case of every single contract negotiation,” said Wenger in December 2016. “But personally I think that Gibbs should stay here.”

Why, Arsene? If one of the accusations against Arsenal’s manager is that he has lost his ruthless edge, Gibbs is the personification of that charge. The left-back turns 28 in September, has a year left on his contract and has only just clicked over 100 Premier League starts despite making his debut in April 2009.

If the excuse before was that Gibbs was a handy back0up, that usefulness has now disappeared following the arrival of Sead Kolasinac. The most recent reports suggest that Arsenal’s high asking price means Gibbs could well stay until the end of his contract, which means paying him £60,000 a week to be third-choice in his position before he moves on a free next summer.