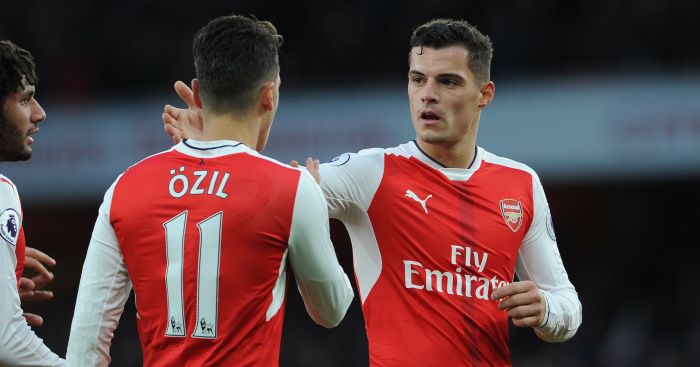 Rob Holding
Had you told me at the end of March that by June, Holding would be the most obvious pick for a list of players Arsenal must build around, I’d have laughed in your face. Not even a giggle, either, but a drawn0out, deliberate hearty laugh right up close to your mouth while I looked you in the eye. You’d probably have punched me, and then I’d definitely have cried.

At that point, Holding had gone five months without playing a minute in the Premier League, his only three league appearances including the home defeat to Liverpool and subsequent draw against Leicester City. Now, he’s an important member of a three-man central defence after shining in both the Premier League and FA Cup.

Holding is also the only British player under the age of 23 to play more than once in the league for Arsenal last season. Worth looking after, that one.

Aaron Ramsey
I’m still not convinced he’s the real deal and his injury problems make trusting him a risky business, but there is no doubt that Ramsey has the kind of temperament and will to win that football managers can’t get enough of. Like Danny Welbeck, it makes Ramsey easy to love.

With Santi Cazorla, Per Mertesacker, Laurent Koscielny, Nacho Monreal, Alexis Sanchez, Mesut Ozil and Theo Walcott all aged 28 or over, Ramsey is also one of the youngest of Arsenal’s senior players at the age of 26, which is a little frightening for those supporters who remember Wenger’s team being littered with exciting potential. Their five most regular starters in the league last year are all aged 28 or above – what happened? Still, no time for tears.

Granit Xhaka
Not a good first season, whatever Twitter users ‘Xhakaholic’ and ‘GranitTheSaviour’ might tell you. Yet Arsenal supporters are keeping the faith given the evidence of watching Xhaka play in matches when he wasn’t partnered with Francis Coquelin. Dealing with that kind of positional indiscipline would leave N’Golo Kante flustered.

Having become the second most expensive player in Arsenal’s history when he signed, Wenger can hardly afford to give up on Xhaka now. With Cazorla semi-permanently injured, Jack Wilshere’s future up in the air, Coquelin a liability and Mohamed Elneny already halfway to becoming forgotten, the manager’s responsibility is to partner Xhaka with a central midfielder who allows him to show off his best skills. As Wenger himself admits, that isn’t tackling.

Mesut Ozil
Is he perfect? No. Does he really want to be there? Can’t say yes with any degree of certainty. Is he capable of moments of magic? Absolutely. For all the criticism of Ozil’s inconsistencies, on his day his vision and chance creation are up there with any other player in Europe.

While the suspicion is that Sanchez will try and force through a move even in the final days of the transfer window, Ozil’s future is a little more secure. Even if the negative spin on that is that no elite club is trying to sign him, it still makes Ozil worth building around. He could drag them back into the Champions League.

The new striker
Whether Alexandre Lacazette is a whacking great upgrade on Olivier Giroud remains to be seen, but there is plenty to be said for freshening things up and bringing in a player that every supporter can get behind. Given Atletico Madrid’s record of developing strikers into some of the best in the world, nipping ahead of them in the queue is no bad thing.

Since 2005/06, only once has an Arsenal player scored more than 30 goals in all competitions in a season. That was Robin van Persie, who was promptly sold to Manchester United, where he won them the league. Given that Arsenal could well lose both Sanchez and Giroud this summer – their top goalscorers in each of the last four seasons – they really do need Lacazette (or the alternative) to work. It could be the lease of life they desperately need.