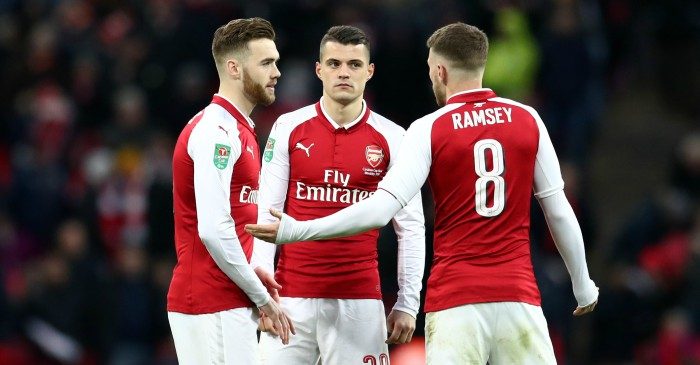 Another game and another defeat for the Arsenal Flaccids. As they so often do now, they looked lame and limp. The thing that infuriates is that they don’t lack talent, but too often they lack grit, motivation and character. They seem insubstantial and soft. The very worst examples of the pampered modern footballers.

But that can’t really be true, can it?

No-one gets near the pinnacle of the game by being soft and being a pushover, either physically or mentally. You have to be dedicated and determined to be successful at football. It’s not just gifted to you.

And let’s also keep in mind that these are players who have played well on the international stage and will do so again. So if they’re not intrinsically weak or airy fairy, what’s gone wrong? Why does so much ability so often evaporate at Arsenal? Why do they look spineless? Where did their spines go?

Many fans and ex-pros have said for so long that Arsenal have no leaders in the Patrick Vieira or Roy Keane mould, indeed “there are no leaders anymore” is a popular mantra uttered by many such as Graeme Souness, who seems to take this as a personal affront to his masculinity. The ‘no leaders’ argument goes like this.

For the first goal yesterday, Shkodran Mustafi – when nudged out of position – just gave up. Would Tony Adams have stood for that? No. He wouldn’t. Indeed, phone-in callers kept raising Adams’ name as a leader who wouldn’t have allowed these ballet dancers to mince around doing sod all. It is as though such critics think all that Arsenal or any modern team needs is someone with a long neck running around shouting at people like a psychotic Sergeant Major.

But is that what a leader really is in the 21st century? Is that really all that is needed at Arsenal? Shouting? I don’t think so. Shouting is overrated. The malaise is one rooted in how the club is being managed and coached and operated. It is infused with the club culture. Organisations tend to be a reflection of the people who run them and that is very much the case at the Emirates.

There’s an easy default in 2018 to blame players for being over-sensitive and insubstantial snowflakes. This is all wrapped up in the idea that modern footballers don’t like being shouted at and will run away with their skirts over their head if anyone, in the old parlance, “digs them out”. I still don’t know what being dug out means in reality. I assume it’s someone screaming swear words and jabbing their finger at you, with eyes bulging and neck veins sticking out like an old skipping rope wrapped around a lamppost. Why’s that a good thing? It’s not. It’s a nonsense. It wouldn’t impress me. In fact, I’d assume they were a bit stupid if all they could do to convert you to their view was shout until their eyes bled.

If it is true that the modern footballer doesn’t respond to such old school tactics as shouting and throwing teacups (it was always teacups, wasn’t it? Surely they’d have mugs) then that strikes me as a good, not a bad thing. Not wanting to be someone’s verbal or physical punchbag is perfectly reasonable. Arsenal are not merely lacking a man who can shout and point with vigour. That much is obvious.

Mustafi didn’t wimp out of a proper challenge when nudged by Sergio Aguero because he didn’t have a strident captain; that sort of attitude is deeper and it’s one many get infected with at Arsenal. Even Pierre-Emerick Aubameyang already looks less substantial than he did at Dortmund. He actually looks like an Arsenal player already. It appears that the Arsenal malaise is already decaying his talent and making him worse. Once you breathe in the debilitating Arsenal air, the diminishment begins and no amount of braying like a donkey at them would make any difference at all.

Let’s just talk plainly. All these players seem to lack something because of the manager’s attitude. They reflect him. Complacency is accepted. Bloodless performances excused. Everything is now so wrong at Arsenal that it is wilting previously vigorously growing flowers. For a long time now, the manager dressed up failure as merely a different flavour of success. Or worse, he resorts to the coward’s way out: he blames referees for their failure.

If he insists on being the manager for any longer, we will see Arsenal players at the World Cup playing brilliantly for their country, then returning to north London, once again breathing the soporific Arsenal air and becoming in and out, up and down, flakey and flaccid again.

The manager is the tap root to his squad’s motherlode of overpaid uselessness, whilst simultaneously being the totem of it, as he continues to collect more money in one day than the typical yearly wage of someone who actually does a job of value to society. It’s a problem.

It’s one thing not to be very good, it’s another altogether more rarefied stench of failure to make excellent players into average players. It’s reached such a ridiculous situation that if Arsenal play well and beat City in the upcoming game on Thursday, it will only cast a worse light on the Arsenal players for doing it this time, but not last time. In other words, every game is now a lose-lose for the players. It is an inescapable spiral of negativity.

So let’s not hear anything more about Arsenal lacking leaders on the pitch, that’s irrelevant, it is off the pitch where there is no leadership. It’s as naked as a razor and perhaps most terribly of all, it has reached the point where it’s actually become embarrassing for everyone in football to witness. There’s only one solution and everyone knows what it is. And it’s not shouting.