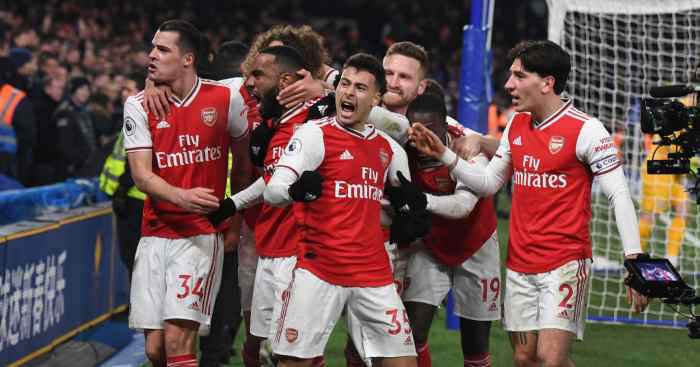 Gabriel Martinelli insists he is focused on glory at Arsenal, and is paying no attention to the reports linking him with a move to Real Madrid.

Martinelli has scored 10 goals in 26 appearances for the Gunners this season since his £7million move from Ituano in his homeland in the summer.

The 18-year-old’s tremendous pace, prolific scoring and impressive displays are said to have alerted the likes of La Liga giants Real, with a report in January claiming they were ready to pay £50million to bring him to the Bernabeu.

But Arsenal are in no hurry to sell, especially amid ongoing claims that Pierre-Emerick Aubameyang could be on the move, with Martinelli contracted to the Gunners until 2024, and set to be offered a pay rise from £10,000 a week to around £30,000 per week.

And now Martinelli himself has come out and admitted he foresees a long and successful career for himself at Arsenal and is determined to make himself a club legend at Emirates Stadium.

“I want to win the Champions League and lots of domestic titles to make Arsenal’s fans very happy,” the Brazilian revealed to FourFourTwo.

“They deserve the best – not only the supporters but all of the club’s staff. I’d like to give back to the club after everything they’ve done for me so far and, as a result, become a Gunners legend.”

Although Martinelli did not get chance to work for long under Unai Emery, the man who brought him to Emirates Stadium, the teenage striker – labelled the ‘Talent of the Century’ by Jurgen Klopp – admits he owes plenty to the Spaniard for putting his trust in him.

Emery has since been replaced by another Spaniard in Mikel Arteta and Martinelli is impressed by his new manager’s keen eye for detail and his calm personna.

“He’s been brilliant,” the Brazilian added. “He pays a lot of attention to moves and keeps pushing me to improve my game; not only in attack but defence, too.

“The boss is very wise tactically and incredibly helpful. He’s not an angry guy at all, but likes showing you exactly what to do on the pitch: ‘If the ball goes that way, don’t stay here, go there and turn your body that specific way. He has a keen eye for detail.”