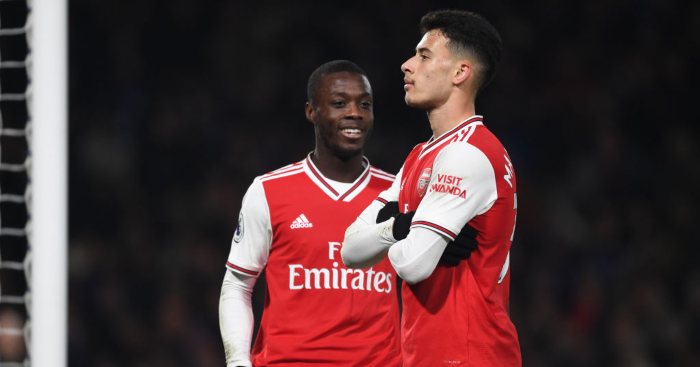 Gabriel Martinelli is expected to feature for an hour in the Papa John’s Trophy on his return from injury for Arsenal.

Martinelli has not played since early March after suffering a knee injury during lockdown in June.

The Brazilian had been one of the true bright sparks of Arsenal’s mixed 2019/20 season, his ten goals in 26 appearances including memorable strikes against Sheffield United and Chelsea.

But after missing the start of this campaign, Martinelli is now expected to play against AFC Wimbledon on Tuesday.

Football.London report that while his return was pencilled in for no sooner than late December, the forward ‘will be back ahead of schedule’ to play between 45 and 60 minutes against Wimbledon.

Martinelli has been back in full training for around a week and his comeback will provide a timely boost for Mikel Arteta, who is under immense pressure in north London.

The 19-year-old has already earned rave reviews from outside Arsenal for his performances, with he and Liverpool manager Jurgen Klopp even trading compliments.

Klopp had referred to Martinelli as “a talent of the century, an incredible striker” in February, with the player revelling in praise from “one of the best tacticians in the world”.

Let’s hope he has been working on his crosses in rehab.