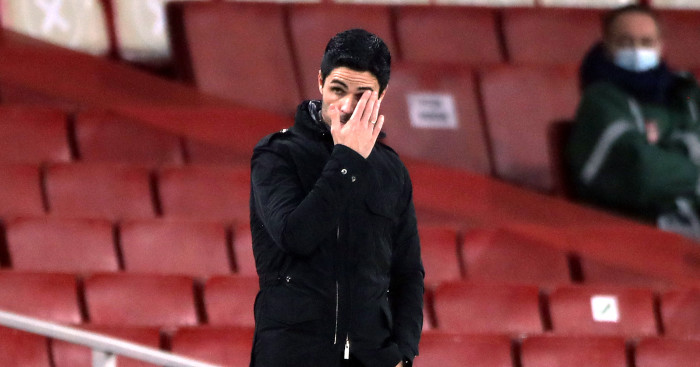 An 18th successive Carabao Cup tie win for Manchester City was no great surprise, even if it did end Arsenal’s own run of 13 cup ties without defeat.

Any suggestion that these outwardly similarly impressive records represented a meeting of equals was always a stretch, even if one of those cup ties on Arsenal’s record was that fine FA Cup semi-final victory back in July.

The world, though, was very different then. This was just another disappointment for Arsenal in a long, miserable string of them. Mikel Arteta has been desperately trying to find some numbers that make things look more positive, and there were bright spots here. But that only adds to the overall sense of despair at the depths to which the Gunners have sunk; they are now a club that looks to take the positives from a 4-1 home defeat. It’s a grim business.

And even the positives that were there came with caveats before you even got to the fact, and we can’t stress this enough, they lost at home 4-1.

Gabriel Martinelli’s first start since March as he continued his comeback from serious injury was a big plus in the first half. He was prominent in everything good Arsenal did and produced a delightful pure maths of a cross to set up Alexandre Lacazette’s equaliser. But this is Arsenal. Martinelli then suffered an apparent ankle injury in a clash with City keeper Zack Steffen, hobbled around for the last four minutes of the first half and then – inexplicably – re-emerged for the second half. Three minutes later he hit the deck again and was at last replaced by Nicolas Pepe. If that injury has been even slightly exacerbated by his playing on…

Another sort of bright spot for Arsenal was the way they fought back from the early disaster of trying to set up with a Mourinho low block, only to concede an almost sarcastically sloppy goal with less than three minutes on the clock. A switch from a back three to a back four made a difference and, while the equaliser came against the run of play, Arsenal ended the first half well.

But how much can you really take from that if you promptly conceded to the first three attempts you face in the second half? And that’s ignoring the fact that all Arsenal actually did was put out the fires they themselves had started.

There were caveats even in the subsequent goals. The second was the sort of individual goalkeeping error that a manager can do little about – although he could perhaps have played his number-one keeper given there is no road to anywhere for Arsenal in the league. The third was the sort of decision that once upon a time would’ve been described as “just about level” but that we all now in the age of VAR and lines on screens instantly identify as offside. The fourth was another all-round defensive shambles, but come on – the game was gone by then.

It’s just so hard to find any kind of positive for Arsenal that doesn’t end up with you feeling more depressed than when you started. They’re an absolute mess of a side, there is no evidence of coaching. There is no defensive cohesion, and the attacks remain predictable and pedestrian. They have a lopsided and bloated squad and this is becoming a dysfunctional football club from top to bottom.

And it’s not even like City were at their irrepressible best. They slightly lost focus after the early goal, understandably dozing off as they contemplated the lack of opposition in front of them. As soon as they got anything like their game faces back on, they ran away with it – with Phil Foden very much to the fore in scoring the third and creating the fourth, both of them in delightful fashion.

That, really, was the story here. Whatever dimly-shining positives there might be for an Arsenal side on the bones of its arse and with Chelsea up next, the facts were these: Arsenal were comfortably and demonstrably inferior to a half-asleep Manchester City side playing well below its potential both on the night and across the season as a whole.

Arsenal have fallen a long, long way and the road back looks horrendously difficult.