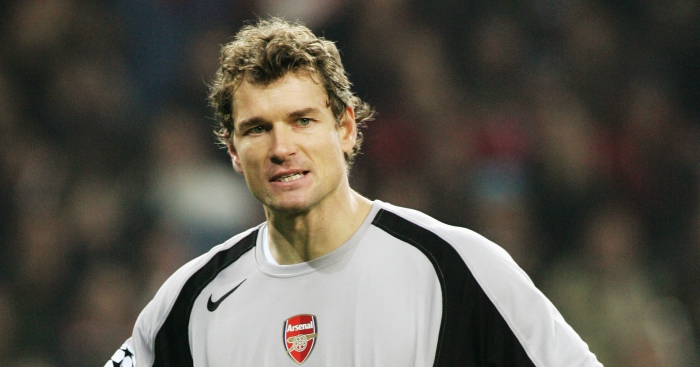 Jens Lehmann says that Dietmar Hamann once tried to persuade him to leave Arsenal for Liverpool.

Lehmann joined Arsenal for his first spell in north London in summer 2003, and was a key part of their ‘Invincibles’ title-winning season.

The German fell out of favour shortly thereafter however, losing his place to Manuel Almunia the next season after a couple of defeats.

In an extract of his upcoming autobiography, exclusive to the Daily Telegraph, the German says that Hamann phoned him in 2004 to ask whether he wanted to join Liverpool.

‘Ultimately, we remained unbeaten in 49 consecutive league games. For a long while at Old Trafford it was 0–0, until Wayne Rooney went down in my area and was immediately awarded a penalty. The referee’s name was Mike Riley, and I remember him to this day. We ended up losing 0–2, our historic run broken by a dive.

‘One win and three draws later, we played Liverpool away, and were defeated again. It was my second-ever Premier League loss, and yet the manager comes up to me and says, ‘Jens, you’re not as fresh any more; you seem tired; I’m taking you out now. If you start having problems with your national team because of this, you may as well leave.’

‘Naturally, I felt completely wronged and felt like going up the wall in my anger. I would not be bullied. I was no longer a single man who could pack his bags from one day to the next: my kids had finally settled into the country after a year and a half; I could not force yet another move onto them.

‘On the very evening when I was pondering this, Didi Hamann phoned me; he was playing for Liverpool. “Listen, Jens,” he said, “We need a new keeper.” That was certainly tempting, the perpetually terrible weather in Liverpool aside. But since I had been listening to my own thoughts so carefully earlier, I declined. “No thanks, I want to keep trying to continue at Arsenal.”

‘And promptly, as if it were a sign, Manuel Almunia played poorly against Bolton Wanderers the next day. After another defeat match against Manchester United two weeks later too, I found myself back in goal.’