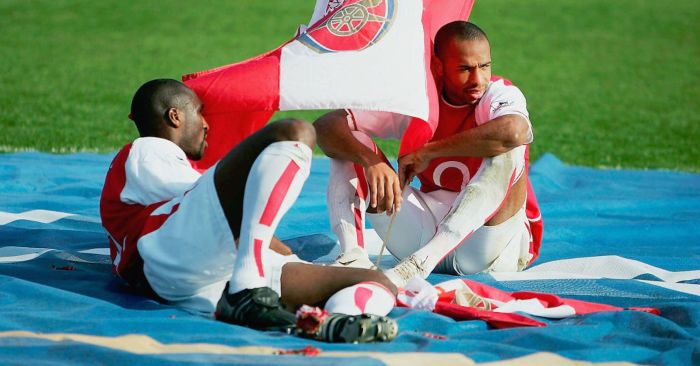 The Arsenal Invincibles completed a full Premier League season unbeaten on this day 16 years ago.

The Gunners lifted the title after winning 26 and drawing 12 games, becoming only the second side since Preston in 1888/89 to go an entire top-flight English league campaign without defeat.

Their overall run started with a 6-1 win over Southampton in the penultimate match of the previous season and ended at 49 games unbeaten. The marker remains untouched after Liverpool fell at the 45th hurdle against Watford in February.

Thierry Henry feels that “people forget” one thing in particular about that sensational Arsenal team, so we thought it only fitting to delve a little deeper into their phenomenal record.

All statistics refer only to the time of the 49 games from the Southampton win to the 3-1 victory over Aston Villa in October 2004, which came eight days before Manchester United beat the Gunners 2-0 at Old Trafford.

* The Arsenal Invincibles earned 121 points throughout their unbeaten run, 16 more than closest rivals Chelsea (105) and two more than Everton (61) and Tottenham (58) combined in the same time.

* The Arsenal Invincibles earned at least twice as many points as five other sides who were ever-present in the Premier League throughout their unbeaten run: Birmingham (59), Tottenham (58), Southampton (55), Blackburn (53) and Manchester City (52).

* Thierry Henry (39) scored the most, followed by Robert Pires (24) and Freddie Ljungberg (ten). Jermaine Pennant scored a hat-trick in the first game of the run and none in the 48 thereafter.

* Two players scored own goals for and goals against the Arsenal Invincibles: Sami Hyypia and Franck Queudrue

* Thirty-three players featured for the Arsenal Invincibles throughout their unbeaten run, from Thierry Henry (48 games, all starts) to Stathis Tavlaridis (15 minutes of the 6-1 win over Southampton in May 2003).

* Arsenal drew the only game Thierry Henry missed – 1-1 at Leicester in December 2003.

* The Arsenal Invincibles recorded 15 different Premier League scorelines. The most common was a 2-1 victory (ten times), followed by a 1-1 draw (seven times):

* The Arsenal Invincibles had the best aggregate score against Middlesbrough (13-4 from three games). The only two clubs they did not have an aggregate advantage over were Portsmouth (2-2 from two games) and Manchester United (1-1) from two games:

* Excluding the concession of one own goal (Lauren against Manchester City in August 2003), 32 different players scored against the Arsenal Invincibles. Only two did so more than once: Tomasz Radzinski and Henrik Pedersen.

* The Arsenal Invincibles were in front for 52.4% of the 49 games in their unbeaten run, spending just 5.9% of it trailing at any point.

* They were behind by more than one goal only once: for 15 minutes of their 5-3 win over Middlesbrough in August 2004. Tottenham led them for the longest overall: 64 minutes in November 2003.

* Only two teams led the Arsenal Invincibles in separate matches: Portsmouth and Liverpool.