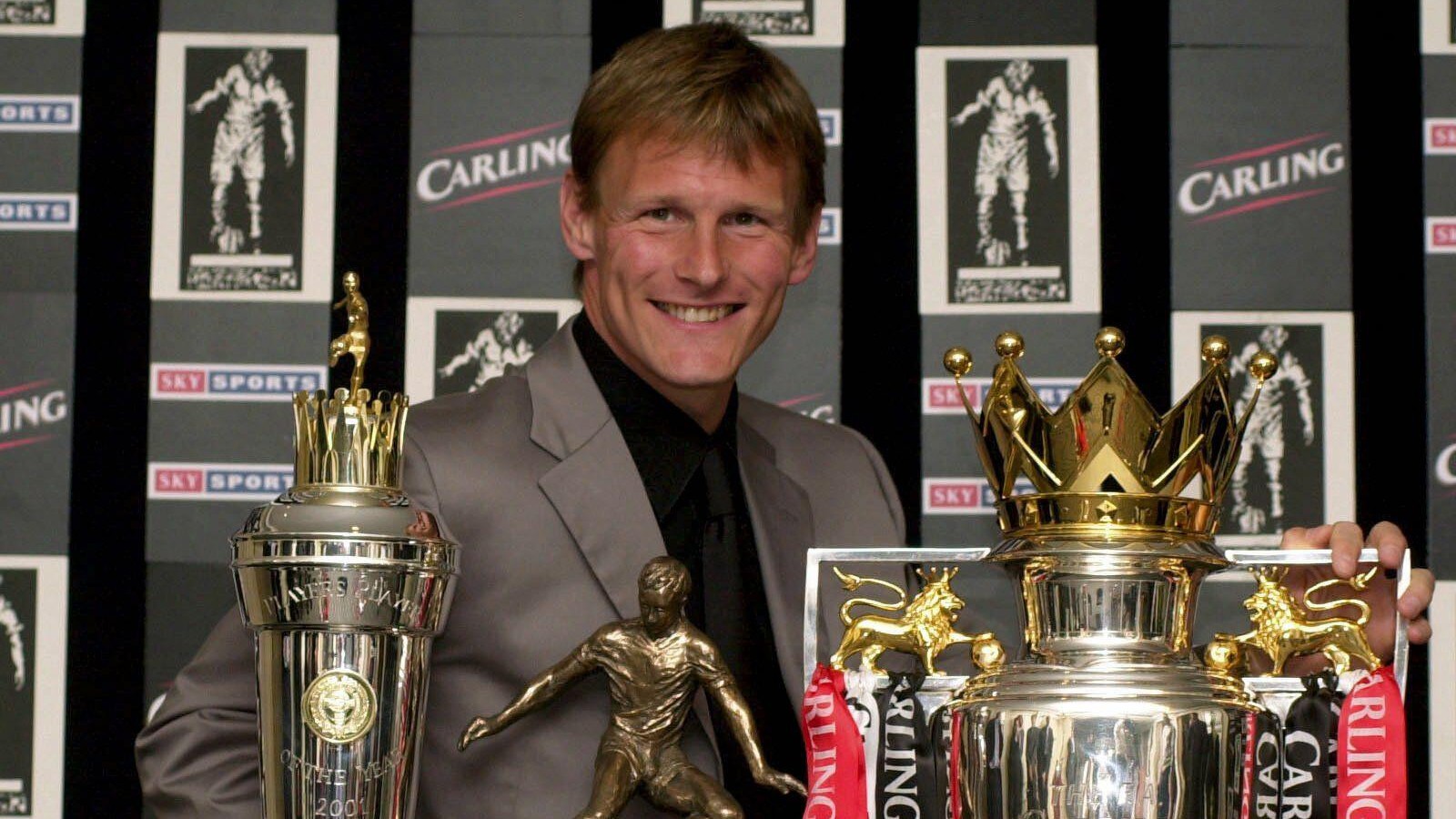 Oleksandr Zinchenko and Gabriel Jesus have been signed by Arsenal this summer, but buying from the champions is no guarantee of success.

GOALKEEPER: Petr Cech (Chelsea to Arsenal, 2015)
“He will save them 12 or 15 points a season,” said Chelsea captain John Terry of the impact Arsenal might have expected from Petr Cech as he packed his bags to head across London in 2015. The Gunners finished the prior season on 75 points, then collected 71, 75, 63 and 70 points respectively in the four campaigns Cech spent at the Emirates. Wayward mathematical predictions aside, the £10m signing won a fifth FA Cup and fourth Golden Gloves award in his three seasons as a regular starter, providing an accomplished bridge between the eras of Wojciech Szczesny and Bernd Leno.

RIGHT-BACK: William Gallas (Chelsea to Arsenal, 2006)
Both Willian and David Luiz made the previously rare direct journey from Chelsea to Arsenal after Cech, but before William Gallas in 2006 it was George Graham who last crossed the divide in that direction 40 years prior. The four years Gallas had at the Emirates will be remembered for one thing by most but his overt unravelling at Birmingham unfairly clouds an accomplished spell in which he served as an admittedly divisive captain. Similarly controversial was his adoption of the No.10 shirt, an honour he briefly fulfilled when becoming Arsenal’s third-highest scorer in their run to the 2009 Champions League semi-finals. Gallas carelessly lost the armband due to an interview in which he questioned the younger segments of the dressing room, before he left in a way that echoed his arrival in part-exchange for Ashley Cole: with a dispute over pay.

CENTRE-HALF: Nathan Ake (Chelsea to Bournemouth, 2017)
It doesn’t seem right that Nathan Ake is approaching 10 full years as a Premier League player but a decade will have passed since his debut in December. That breakthrough came under Rafael Benitez but Jose Mourinho turned a drip-feed into a completely dry spell and the young defender eventually had to make do with a series of loans. He was sent out to Reading first, then Watford and finally Bournemouth, with whom he spent the first part of the 2016/17 season before Antonio Conte recalled him that January. Ake played five more games for the Blues, winning three FA Cup ties and sitting on the bench for the final defeat to Arsenal, while featuring in two Premier League victories. His pathway to the Stamford Bridge first team was no clearer by that summer and despite Conte blaming “advisers” and impatience in younger players, Ake sought opportunities elsewhere. Things have worked out alright since.

CENTRE-HALF: Robert Huth (Chelsea to Middlesbrough, 2006)
With a second Premier League winner’s medal in his back pocket – and a third never particularly likely along a career path featuring Middlesbrough, Stoke and Leicester – Robert Huth desired a fresh challenge. Wigan and Everton heard the German’s admission that he was “not happy” at his peripheral Chelsea role and they soon lodged offers. But it was Gareth Southgate who swayed it for Boro due to the manager’s history as a centre-half. While Huth suffered with injuries on Teesside, he was a welcome addition to the defence and was sold for almost as much as Boro signed him for after three years.

LEFT-BACK: Kieran Richardson (Manchester United to Sunderland, 2007)
“I have had a taste of it and I want to play for England again but that can only come from playing well for my club and playing in every game,” was the April 2010 message from Kieran Richardson, touted by many as a potential left-back understudy to the inimitable Ashley Cole. His form for Sunderland made it a genuine, albeit distant possibility but the West Ham academy product never did improve on the eight caps he earned under Sven-Goran Eriksson. The consolation prize was perhaps the only consistent run of his entire career both in terms of performances and fitness. Richardson played in a variety of positions and under a fair few managers at the Stadium of Light, which took on an entirely new meaning when he became a born-again Christian soon after his move up north.

RIGHT WINGER: Jonathan Greening (Manchester United to Middlesbrough, 2001)
It is at this stage that you have perhaps noticed the relative lack of quality for an XI proposed as the ‘best’ of something. That only underlines how rare it is to make truly excellent signings from the reigning champions, who probably prefer to keep their absolute best players instead of selling to rivals. With that said, Manchester United shipped Jaap Stam and Teddy Sheringham out in the same summer they granted Jonathan Greening’s wish to leave. The winger had declared himself “good enough to play in any other Premier League team” and resolved to prove his point by heading from Old Trafford to Middlesbrough along with Steve McClaren and Mark Wilson. Greening was voted Player of the Season, earned an England call-up and won the League Cup in three years at the Riverside. See, ‘best’.

CENTRAL MIDFIELDER: N’Golo Kante (Leicester to Chelsea, 2016)
Not since Eric Cantona in 1992 and 1993 had an outfielder won English top-flight league titles for different clubs in consecutive years. Then along came N’Golo Kante, the unheralded replacement for Esteban Cambiasso who helped inspire Leicester to one of the great sporting triumphs. The Frenchman could have stayed for a taste of the Champions League, or even taken a different seat at Europe’s premier table with Arsenal, but he instead timed his jump to the sunk ship that was Chelsea to perfection, aiding Conte’s immediate Blues revival.

CENTRAL MIDFIELDER: Oriol Romeu (Chelsea to Southampton, 2015)
Sitting neatly in between a group containing Mateja Kezman and Darren Barnard, and a quintet featuring Samuel Eto’o and Frode Grodas, Oriol Romeu ranks 149th for all-time Chelsea Premier League appearances. The majority of those games came in the hectic 2011/12 season, culminating in his seat from the bench for the Champions League final. Romeu stayed the following campaign but played even less, resulting in a couple of season-long loans with Valencia and Stuttgart before Southampton promised him a few minutes. The Spaniard has been named the fans’ and players’ Player of the Season and reached a League Cup final on the south coast. Saints have got more than their money’s worth for a cool £5m.

LEFT WINGER: Damien Duff (Chelsea to Newcastle, 2006)
Loved by Claudio Ranieri’s mother and most certainly admired by Jose Mourinho, Damien Duff nevertheless felt compelled to jump from Chelsea before potentially being pushed. The winger made a respectable 125 appearances in three years with the Blues yet could not resist the overtures of Newcastle, much to his subsequent regret. And while his stay on Tyneside ended with relegation, the Irishman won the Intertoto Cup and got to be managed by Nigel Pearson twice. That, combined with the sheer fact he was an actual left-winger and the laundry needs doing, qualifies him for this spot.

CENTRE-FORWARD: Teddy Sheringham (Manchester United to Tottenham, 2001)
Teddy Sheringham was signed and sold by Premier League champions Manchester United, first joining as a trophy-craving replacement for Eric Cantona in 1997, then leaving when Ruud van Nistelrooy made his protracted move to Old Trafford in 2001. The forward picked up close to where he left off at Tottenham, registering double figures for Premier League goals in his two seasons back in his mid-30s. Sir Alex Ferguson even endorsed Sheringham’s rejection of a 12-month Manchester United extension, not least because he helped fire them to mid-table safety and a League Cup final. Although his fondness for Glenn Hoddle was ever so slightly dented.

CENTRE-FORWARD: Dion Dublin (Manchester United to Coventry, 1994)
“The boy has made a decision which pleases me immensely,” said Ferguson after learning that Dion Dublin had picked First Division runners-up Manchester United over mid-table stragglers Chelsea and Everton in 1992. The forward would have doubtless played more often at either of the other two teams; in two years at Old Trafford he made just 15 appearances and failed to even qualify for a Premier League winner’s medal in either 1993 or 1994 – although he was given special dispensation for the former. Dublin departed for Coventry after those two seasons and enjoyed a career renaissance, scoring 63 goals in 152 games, inspiring one of the great escapes in 1997 and winning his share of the Golden Boot a year later, as well as all four of his England caps.