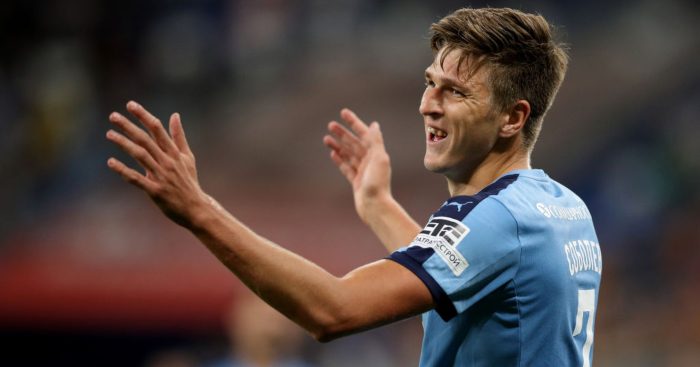 Manchester United-linked Aleksandr Sobolev has confirmed that Arsenal have been watching him play after reports claimed both Premier League clubs were in for him.

The 22-year-old, who plays for Russian Premier League side Krylia Sovetov, recently earned a first call-up to his country’s senior squad after a blistering start to the campaign in which he has scored 10 goals and assisted three others.

An earlier report indicated that United boss Ole Gunnar Solskjaer was interested in signing Sobolev and The Sun now claims that Unai Emery’s side have joined the Red Devils in keeping tabs on the striker.

Speaking to Sport Express, the attacker confirmed that the Gunners had sent scouts out to watch him in action last weekend ahead of a potential move.

“I was told after the Sochi game that Arsenal scouts came to see me,” Sobolev said. “In my opinion this is true. I am not 100 per cent sure, but this is what I was told.

“They said that the scouts were sitting in the stand. Manchester United’s interest? I can’t even imagine how this could be. Where am I [in my career], and where are United?”It is my dream to play in England.  But in order to do so I have to keep on scoring goals, training and working hard.”

The Sun continues that Arsenal believe they can get the striker, who is under contract at Krylia Sovetov until 2022, for a fee of £15m.